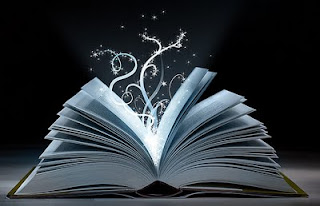 “It is my little book of magic,” the girl said to the man who sat on the other side of the wide, wooden desk. “I have put my heart and soul in it. I want to share it.”

The man pulled his glasses off and rubbed his nose. “No one wants a little book of magic, dear girl. Heart and soul or not, it won’t make money.”

She swallowed as her stomach twisted. “But it is magic. It’s meant to be shared.”

“I’m sorry. It’s not for us.” He returned to his work, and she noticed the deep stress lines in his forehead, the rumpled slouch of his suit jacket. His hands were a blur as he ran pen over paper, ignoring her.

She stood and left, her little book of magic tucked tightly inside her backpack.

The next door held a similar office, with a similar man behind a similar desk. He gave the same answer as the other, and she moved on. 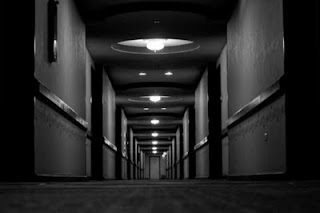 The hallway grew as she walked, doors adding to doors, stretching far behind her. Each door locked with a forever click as she exited, and her heart and head sank lower with each step.

And the little book of magic weighed heavy on her back.

“Maybe I should just go home,” the girl muttered to herself. She stopped and turned around, looking down the narrow hallway. A door at the end swayed open. But darkness pulsed on the other side—a tempting darkness that promised both relief and despair.

The girl slid the backpack off her shoulder and opened it. She pulled out the little book of magic, then clutched it to her chest. The door slammed shut, and even from a distance the girl could read the words scrolled across the wood: The Land of What-If.

She sighed, and reached again for her backpack.

“Oy, little girl, what have you there?”

The lilted voice startled her and she spun, nearly dropping the book. A space suit stood before her, although she could not see who—or what—filled it.

“It-it’s a book. My book. My little book of magic,” she said, her heart sputtering back to a normal rhythm.

One arm of the space suit rose then, and the gloved hand pushed a button on the side of the helmet. The dark shield clicked and slid upward, revealing the face beneath.

The little girl gasped. The creature’s face was covered in downy feathers, with bright, round eyes. A pair of metal-framed spectacles perched on its narrow beak.

“A kiwi, to be precise,” the creature said, and a smile ruffled the feathered face.

Comfort flooded the little girl as she gazed at the kiwi’s warm expression. “Would you like to see it?”

She handed the little book of magic over, and it was grasped lovingly by the gloved hand. The kiwi sat against the wall then, and opened the book. The girl held her breath in anticipation as those bright eyes scanned page after page.

Finally, the kiwi looked up and closed the book. The bright eyes blinked. “Why have you not shared this little book of magic, dear girl?”

“I have no means to share it myself, and those who do will not help me.” She turned toward the hallway behind her and stared at the forever-locked doors, refusing to let loose the tears that burned the edges of her eyelids.

She heard scuffling, and then the kiwi’s voice again. “Would you come with me if I offered to help you share your little book of magic?”

The girl eased around to face the now-standing kiwi once more. “Yes,” she said, and followed the kiwi far, far from the dreary hallway.

...And for those of you who didn't quite catch that, because maybe you're not familiar with Grace Bridges from Splashdown Books...Grace is a sci-fi writing New Zealander, which makes her a "space Kiwi"...and yes, she has agreed to publish my novel, Finding Angel. The release date is scheduled for Sept. 1, 2011.

Odd Little Miracles is Splashdown's most recent release, although that's not the main reason I'm giving away a copy. Fred Warren is the reason I found Splashdown. I fell in love with his short stories I'd found online and decided to buy his book, The Muse, which is, of course, published by Splashdown. I knew then that Grace had an eye for awesome fiction, and the more I got to know her, and the company, the more I wanted to earn a spot in her catalog! So, thanks, Fred, for being such an awesome writer and drawing my attention to Splashdown.

Leave a comment to enter. I'm posting this on multiple blogs, btw, so you can enter at each place: at New Authors' Fellowship, at my Finding Angel site, and right here.
Posted by Kat Heckenbach at 5:08 AM

Congrats, Kat. This has been a long wait for you. You must be bouncing off the walls. : )

You said to leave the comment here also. Here is mine:

Thanks for mentioning the significance of the kiwi -- I had missed that.

You said to leave the comment here also. Here is mine:

Thanks for mentioning the significance of the kiwi -- I had missed that.

Hi, Kat!
I left a note at NAF a couple of days ago but thought I ought to check here too! Warmest congratulations on your success. See? You really were magic after all!

Congratulations just doesn't seem like enough! You've worked so hard and you've met your goal - signing a contract by your (I won't say which one) birthday!!! I'm so happy for you and so proud of you. And...mulabaI finally get to read your book:))) It's been a long wait, but worth every minute because Grace is publishing it for you.

Love you so much,
Mom

Very nice story and congratulations on your book publishing deal!

Thanks, everyone! Sorry it's taken me so long to check in here :). I really appreciate all the congrats, though!