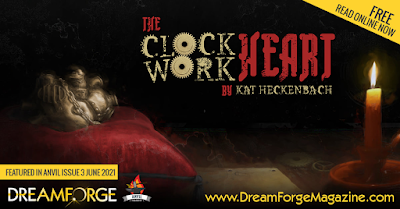 My newest short story has released in DreamForge Anvil, a wonderful online magazine that publishes all sorts of science fiction and fantasy short stories -- and fortunately for me, they publish steampunk!

"A Clock-Work Heart" is a retelling of Edgar Allen Poe's "The Tell-Tale Heart" but with a twist.

Here's a bit to get you started:

The automaton had served me well, but I refused to feel remorse about decommissioning him. It , not him . Automatons are things, not people. Everyone knows that. Everyone insists . And Oscar was no exception. He— I mean it was metal and gears, nuts and bolts, springs and wires, nothing more. I would not lose a single night's sleep over this.
The screw I'd been turning broke free of its hole and landed on the worktable with a soft tink . I lifted the corroded and warped plate covering the center of Oscar's chest and set it aside. Light from the sconces above the table reflected and shadowed the peaks and valleys of Oscar's form, amplifying the tarnished appearance and highlighting the numerous dents and scratches. The rest of the workshop remained in moonlit dimness.
Just a thing. I'd built... it myself. Designed every feature, carefully placed every part down to the last rivet. I'd given Oscar eyes that could rotate, a hinged jaw, jointed fingers and opposable thumbs, but no one in their right mind could mistake him for human. No skin, no flesh of any kind. Brass plating. Glowing lights. Metal that creaked and clanged with every movement when I failed to keep it oiled properly, and then even with constant oiling— until movement became nearly impossible because of corrosion and other damage. It was imperative the body be obviously mechanical. Machines must be inferior to humans. They have their place. Nothing more than tools.
I had, however, put particular care into Oscar's heart.