Right When I Needed It 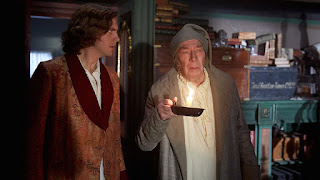 Last night our family finally watched The Man Who Invented Christmas. If you haven't seen it, it's the story of Charles Dickens and his inspiration behind A Christmas Carol. In the movie, the characters appear to him, almost physically, and he has conversations with them in order to learn their personalities and fates in the book. Beastie 2 asked me if that was what happened for me. No, it's not. But much of the rest of his process rang quite true for me.

BTW, I realize the movie is fictionalized. I have no idea how much of it is true. So, when I refer to Dickens from here on out, remember that the Dickens I'm referring to is the movie character only.

Unlike Dickens, I don't keep a notebook with a running list of names inspired by people I meet, but I am often inspired to give characters unusual names I encounter. And characteristics of people I meet definitely show up in my characters, although generally all broken apart and mashed together again in different ways. I also very much have moments of total inspiration where I can't get the words out fast enough, and times where I just feel blocked.

There was a section of the movie that dealt with Dickens receiving advice from friends regarding Scrooge--they insisted he should be redeemed at the end, rather than staying a horrible old miser as Dickens planned. In the end, Dickens was quite glad he heeded their advice (as was Scrooge). I had a similar situation present itself while writing Relent. I can't go into detail without major spoilers, but at the behest of several beta readers, I made a significant change to the ending, a change directly affecting the fate of a particular character, and I absolutely now see how right I was to listen to them!

There was one thing--a continuous string of things, actually--that really struck home with me and made me wonder about the timing of writing. You see, Dickens was inspired by events that were going on around him at the time. Had he started writing A Christmas Carol at any other time, he would not have been focused on the social issues going on. He would not have heard those specific comments from people he encountered that inspired lines of dialog in the book. He would not necessarily have seen even the faces that inspired his characters. He would not have even chosen to write a ghost story had he not overheard his children's newly-hired nanny telling scary stories.

Right now, I'm working on a ghost story of my own. My original inspiration came years ago. I've only made progress in bits and bursts since then, finally hitting the 40,000-word mark just this week. I've been stewing in frustration over it, berating myself for taking so long. I had desperately wanted it finished before Realm Makers last year, yet nearly eight months later I'm still working on it. It's the first time I feel I've truly understood what is meant by the phrase "writer's block." And yet, I know exactly where the story is going, exactly how it is to end. There are just some steps along the way that have only been coming clear one at a time and under specific circumstances.

The most recent example is the most clear, so I'll give you that one. I just hit a point in my ghost story in which the main character, Amelia, is searching for proof that another character is the owner of a plot of land. The librarian leads Amelia to a back room at the library...and there I got stuck. What was this room? Why was it special? Oh, I knew it had to be something unique, but I had no idea what.

Then yesterday happened. I went to visit a dear friend who lives in Plant City, FL. She took me on a tour of the downtown area (where I've been a few times, but never properly explored). While there, poking around in antique shops, I mentioned a neighbor who loves buying old photos. My friend got very excited and took me to the Plant City Photo Archives--a building that houses photos and documents chronicling the entire history of Plant City. The walls were covered with photos, and shelves everywhere held ledgers and binders.

This! This was the room I needed! Granted, it will be a bit more compact in my book, but when I walked into the PCPA, I knew I'd walked into my library's back room. Okay, yes, libraries often have archive rooms, but in my hometown I've never seen one (definitely not in the years in which I've been writing). And this archive is specific to the history of a small town. And, the point, of course, is that I happened upon it at exactly the moment I needed it.

Could I have finished my ghost story before now? I'm honestly not sure. Maybe if I'd been pushing myself harder, I'd have stumbled across another answer. Or, the story would have run a different way and I wouldn't have needed that archive room.

Or, maybe this was exactly how the story was supposed to be, only I wasn't meant to find this place until yesterday.

Hey Kat! What fun to learn you've discovered the treasure of our Plant City Photo Archives and History Center and enjoyed our sweet downtown district. Gil Gott, Director of the PCPA, contributes a "Did You Know?" local history column each month for Focus Magazine. The center developed because one of our local photographer's collections was donated to a friend who decided it was too rich not to share with the community. Other locals have volunteered to scan class yearbooks and military service photos. I'm not sure many cities have a resource like this one, but they should. They also have hosted a local author book signing or two in the past (with groups of authors together). Perhaps we'll see your latest book here soon!

Cheryl, thanks for sharing that--I didn't know the history of the archives. We just walked through and peeked around a bit, but it was really cool.