Here There Be Dragons

As I was hanging my latest art purchase--a dragon print by Stanley Morrison, purchased while at the Necronomicon last month--I realized my house is slowly being taken over. I've always, always, always loved dragons, and I've had my share of them in many forms over the years, such as t-shirts and candles. I have neither of those anymore (unless you count my Ender's Game Dragon Army tee), but I do have dragons lurking in every room of my house. Today I thought I'd share them with you.

This one hangs by my desk on the side of an armoire. The artist is Rob Carlos. It was given to me by Grace Bridges, my dear friend and Space Kiwi. See that coin on the corner? That's a New Zealand dollar. 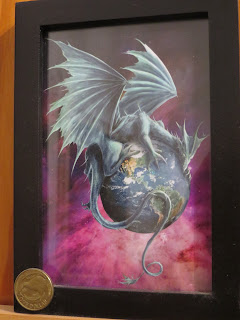 These next two are in my hallway. They are the creation of the aforementioned Stanley Morrison, both bought two years ago at Necronomicon. I adore his artwork. I promise you will believe how wholeheartedly I mean that by the end of this post. 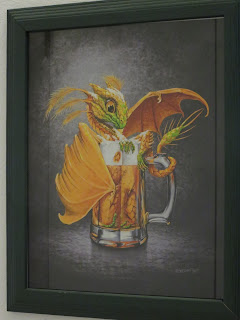 A puzzle I put together a few years ago. The only place I could find to hang it where it would fit properly--it is BIG--was my hallway with the thermostat. Well, dragons do heat things up... 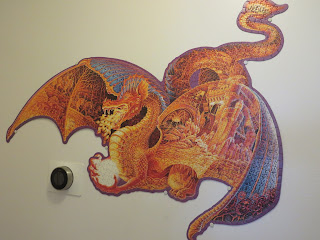 Yes, another Stanley Morrison, bought three years ago at Necronomicon. (Are you seeing the pattern?) 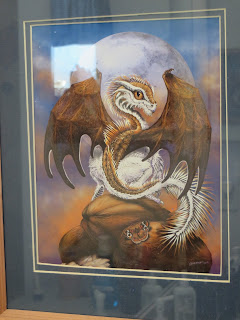 A Mother's Day present from my husband and the Beasties. He guards my bookshelf. 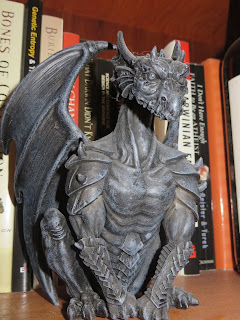 Also on my bookshelf, a coffee mug that holds my reading glasses (which I actually use pretty much only for sewing). The mug sports the art of Heather Young. 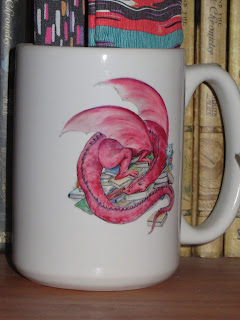 The dragon dagger I bought at the Medieval Times dinner show in Orlando. I refuse to believe I could have gotten it cheaper elsewhere. Also, I paid for the memories. Yeah, that works. 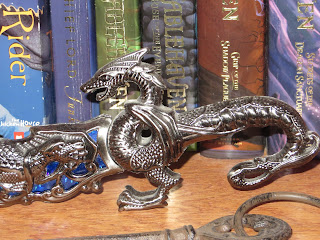 A ceramic dragon I made at one of those paint-your-own-pottery studios years ago. Yes, he was the inspiration for Spike, the dragon pet of Sir Benjamin, who owns the bookshop on Toch Island. 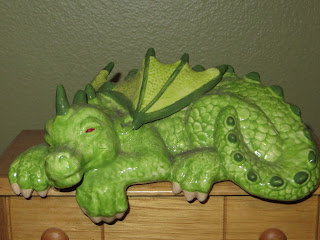 The best deal I ever got at Disney World. Or maybe Universal Studios? Either way, this necklace was a whopping $12, and I wear it all the time. 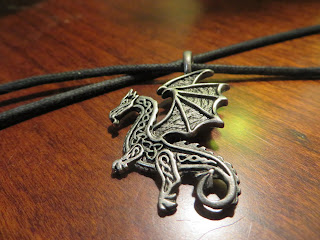 Another two prints I bought at Necronomicon. I don't know the artist for sure on the first one--the signature looks like R. Mayo--but this matches the colors in my bedroom perfectly. The second one is Theresa Mather. They complement and contrast each other nicely. I love the loose sketchy feel of the first one, and the tight, detailed work of the second. 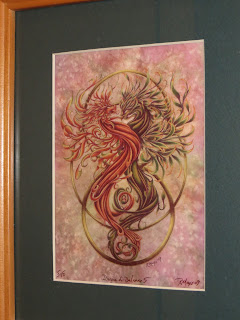 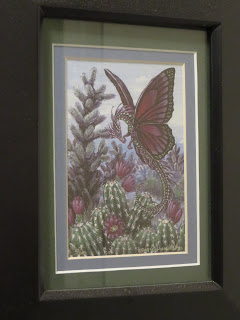 Ah, and here we go....the culprit who started this whole post. The last print I bought from Stanley Morrison at Necronomicon last month. Believe me now? I. Am. Such. A. Fan. 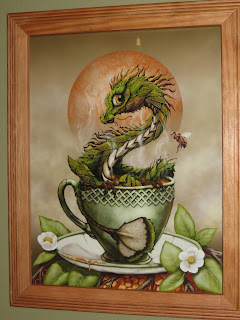 And for more dragons, you can visit the "Dragons!" board on my Pinterest page.
Posted by Kat Heckenbach at 1:59 PM