Free Short Horror Reads: Or, a Taste of My Dark Side

I tend to focus most of my writing posts on my YA fantasy series. But from nearly the beginning, back when I first wrote Finding Angel, I was writing short horror stories as well.

They were published in a variety of magazines and anthologies, but over the years the rights reverted back to me, and I've posted them on Wattpad.

In honor of Halloween, I've posted a list of them here so you can have some bites of my dark writing.

In other words, you can read them for FREE by clicking the titles below.

Death has just taken hold, but John is given a chance to relive his last day.

They say you hear the voice of the dead just before you are about to die...

Day after day they gathered, clustering to watch the fire as it encroached. It moved impossibly slow, like a wall of advancing soldiers surrounding the city.


Hope you found something you enjoyed!

Maybe now, you'd like to try my ebook novella, Ordinary Folk? It's only 99 cents: 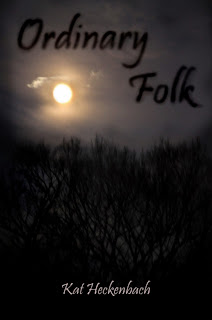 Janey's symptoms are getting stronger, and stranger. Nothing her doctor and Dawson say can get the idea out of her head: It's all tied to the full moon. She knows they think she's being irrational, but she feels the connection in a way she can't even begin to explain.

She needs answers, and the only way she can think to get them is to visit the town where her parents grew up. But the visit is nothing like she expects...the odd looks, the whispers behind her back. And the old man who seems to know her secrets. Is there something in this tiny town's history--and Janey's--that's not so ordinary?

Posted by Kat Heckenbach at 7:56 AM