A Time Vortex Ate September: Or, why I haven't posted in a month, plus Necronomicon 2015 photos

Well, snap. I really didn't realize it'd been THIS long since writing my last blog post. September was apparently sucked into some sort of time vortex. In truth, it was eaten away by birthdays, homeschooling, and writing.

October's a little different. It's been eaten away by conferences. I spent the first week of October prepping for the Florida Inspirational Writers Retreat. Being on the planning committee, I had to help set up the space and pick up all sorts of things...discovering I had a nail in my tire while doing that running around was kinda panicky.

Also, I and my buddy Rick Christensen were in charge of running and judging the creative writing contest -- a contest in which entrants have to tell a story in 55 words or less. Not that we like putting pressure on writers or anything. (One of the winners was author friend Kerry Johnson, pictured here.)

The very next week was the Necronomicon!

It started off with an awesome writing panel called "Yes, Mom, Science Fiction and Fantasy are Real Literature." 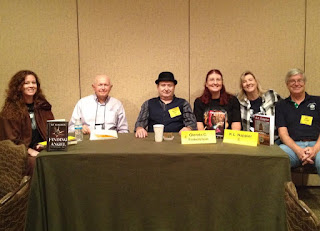 The guy there in the middle was one of our guests of honor, Eric Flint. Super nice. And his wife bought a copy of Finding Angel. Yes, I totally did a happy dance, right in the middle of the conference area!

This was the first of SEVEN panels I was assigned.
The others were:

They were all loads of fun, although only one person showed up for Zombiemania. As I said to my fellow panelists...."Well, we knew this would be dead."

Anyway...as usual, the Necro was AWESOME. I had a blast hanging out with friends, participating in panels, selling books (my best year yet!), and shopping the vendor hall.

Here's my haul from this year's shopping: 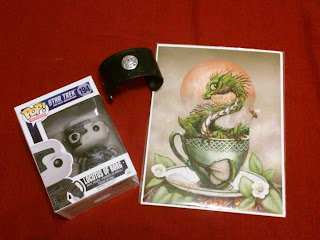 The dragon print is by Stanley Morrison. If you are not already a massive fan, go check out his work here. NOW,

And the leather wrist cuff was created by the same guy (Modern Armour) who made this awesome dog armor:

The dog, of course, was not the only one dressed up. There were loads of costumes everywhere, especially on Saturday. This group was my favorite: 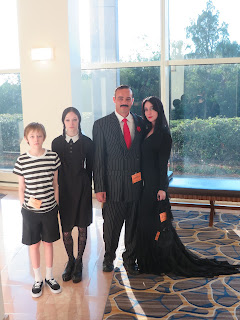 So, again I've shared about Necronomicon. If you haven't come to see me there, maybe this has convinced you? If not, well....you're just missing out. So, come next year! I'll be there! 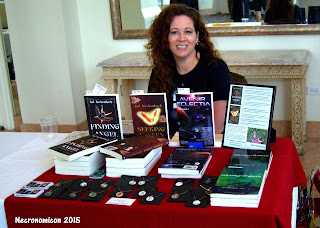 Posted by Kat Heckenbach at 8:40 PM

Love that dragon in a cup!

Oooh... sounds like you were rubbing shoulders with some of my favorite authors, Kat! How fun! :-) I love your books, too, so it's great to hear that you're writing a third. I hope I get to read it when it's done!

Yeah, Linda, the tea cup dragon is amazing. I buy something buy Stanley Morrison every year :).

Thanks, Krysti--glad to know you're excited about book 3. It's been slow going, with school and other projects, but I am plugging away!