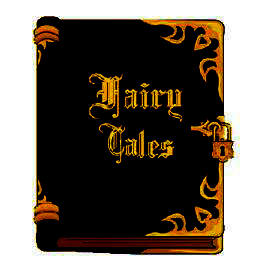 Strange blog title, yes. And a strange post to go with it, I think. I've been reading a book called Wickflicker by an author named Teric Darken. It's classified as supernatural thriller, but I'm here to say I think that's not quite accurate. I'm thinking it should be considered a "dark fairy tale."

It's only recently that I've given thought to what a fairy tale really is. I used to think of them as children's stories. But since I started writing, I've had to look long and hard at the genre classifications and I have discovered that fairy tales are not just for kids--or maybe, not for kids at all. I read three books over the last couple of years that would be classified as fairy tales, and none of them are "children's" stories: 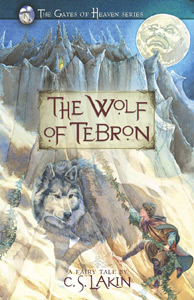 The Wolf of Tebron by C.S. Lakin is a fairy tale, through and through, as are the other two books in the series which are on my to-be-read-very-soon list. In Lakin's guest post on the New Authors' Fellowship blog, I wrote an introduction that included this definition of a fairy tale:

Fairy tales, also known as wonder tales or märchen (from the German), are a sub-genre of folktales involving magical, fantastic or wonderful episodes, characters, events, or symbols. Like all folktales they are narratives that are not believed to be true (fictional stories), often in timeless settings (once upon a time) in generic, unspecified places (the woods), with one-dimensional characters (completely good or bad). They function to entertain, inspire, and enlighten us. In these episodic narratives the main characters are usually humans who often follow a typical pattern (as in a heroic quest) that is resolved partly by magic. The fact that these wonder tales still appeal to us attests to their richness and effectiveness as symbolic (artistic) communication.
As I noted in my intro, Lakin's books have all the characteristics, but I would not call her characters "one-dimensional." I think that many of the modern day fairy tales are like that--they meet all the criteria but are no longer, "Once upon a time..." and the characters are not just the generic "princess" or "pigs and wolf" that are only surface deep. Modern fairy tales have depth and setting and character that make them true novels, while still having that unique style that is fairy tale.

A perfect example of that is I Am Ocilla by Diane Graham. Nope, ya can't get this book yet. It will be coming out next year from my publisher, Splashdown Books. I've read Diane's manuscript, and it is fabulous. Classic fairy tale--with fairies and dragons and some really cool and original creatures. There is a quest, of course, and magic, and it definitely has that "enlightening" quality that the above definition brings up. And its depth and beautiful language make it more than fairy tale. 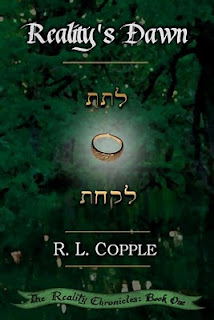 There are other fairy tale novels out there that are different from The Wolf of Tebron and I Am Ocilla, though. They still have the depth of character, setting, etc, but the style is more like the classic fairy tale. It's the way of the telling of the story that gives it that feel, and The Realities Chronicles by R.L. Copple is like that. I read the first book of this series, Reality's Dawn, right before it came out, as it is another book from Splashdown. I had to adjust my thinking when I read it, though. I was expecting "novel" and the stories are told in more of a traditional fairy tale style. The dialog and events are more melodramatic, and at first it threw me. But when it finally dawned on me that "this is a fairy tale" I was able to settle in and truly enjoy the book! There is real purpose in the way Copple tells his stories that is unlike anything I had read, and it made me realize I needed to investigate this whole idea of fairy tale writing. 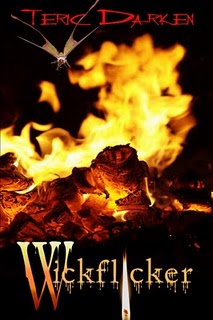 Which leads us back to Wickflicker. My blog title does refer to the author's name, but when I say "Darken" your fairy tale, that's not all I'm referencing. You see, fairy tales, the old traditional ones, are really rather dark. For the most part, we've gotten used to the toned down, Disney-fied fairy tales. But read the original Snow White and you will see that the old fairy tales can be down-right scary.

I'm not sure if Teric was going for "dark fairy tale" when he wrote Wickflicker, and I surely wasn't expecting it. I thought Christian horror, supernatural thriller, Ted Dekkerishness, but not "fairy tale." But the writing, the style...it's so different.

Let me give you an example...

First there is the poetic side:
"The harvest moon waxed bright and bold, though bore a most peculiar frosted hue--its sphere encompassed about by floating ice crystals drifting lazily as phantasmal gestures."

That sentence is in the opening paragraphs, all of which have such a literary, poetic feel. It's surreal and stream-of-consciousness and lovely.

And then this, the beginning of chapter four:
Placing his pipe upon a stand, the wispy figure removed his wire-framed spectacles and wiped them liberally with a kerchief.  His tobacco-laden voice croaked out, “Well now, what a lovely pair of gentlemen.  And who might you two be, hmm?”

And:
I wrestled with my own vexation.  Funny, though this withered trunk of a man is, indeed, a stranger, there is something hauntingly familiar about him; he reminds me, all the more, of someone I’d swear I know.  Perhaps a long forgotten friend… or an enemy of old.

Having never laid eyes on him before, the invisible magnetism whispered of a thousand trips we had ventured together: in earthly treks, in thoughts, in deeds, in dreams… I had, seemingly, done more with this man than I had with my own best friend.  Suddenly, I’d placed my finger on it.  Devil-be-damned, it’s the devil, himself!  All he needs is a…
How different from the opening, yet descriptive and intriguing. And then there are times Darken rumbles into passages that seem suited for some type of twisted poetry slam--"I would give anything to be able to see the naked truth, but truth be told, the more she bore, the truth became harder to bear." And as you can see from what's implied by that bit, Wickflicker is definitely not for children (language and content put this as something I'd reserve for adults and mature teens with the consent of their parents). But overall, the book has made me think "fairy tale"--dark, creepy fairy tale, of devils and demons instead of magical creatures, of horror instead of wonder, of frightening into enlightening, and a quest to save your soul.
(For a longer excerpt click here.)
Posted by Kat Heckenbach at 5:53 AM

A genuine "Thank You!" for your kind words regarding Wickflicker. I also greatly appreciate your unique interpretation of the story.

Pertaining to the opening sequence, with "The harvest moon waxed bright and bold..." you are most perceptive - that was, indeed, scripted from stream-of-consciousness.

Thank you, again, for your kind words, Kat!

You're welcome, Teric. A unique book merits a unique interpretation ;).

Wow, thanks, Kat, for the mention and what you thought of Reality's Dawn. Glad it helped open a window for your reading experience.

It very much did. Reality's Dawn has such a unique style, and I wasn't expecting it at first. I had to step back and expand my view on story telling, which is always a good thing! I think sometimes we readers and writers get stuck in a groove of "writing should sound like this or that" and we need to look around and see all of the different ways of doing it, and recognize that there is not one "right" way.