Fellow writer and blogger Kessie Carroll recommended I do a "top ten" list of books I've read this year. I'm not sure I've ever done a top ten list, but I figured it sounded like a pretty good idea. (You can see her top, um, seven list here.)

But even though I liked her idea, I've got to be a little different. You see, I find that I'd be repeating myself a bit because I've reviewed a lot of books on here already. So first, I'm going to list a few links to those posts. These are books that I'd totally include in my top ten, although there's actually more than ten when you count them up. Most are YA, a couple are not, but they are all awesome.

The Raven Boys by Maggie Stiefvater.

The Telling by Mike Duran

The Unraveling of Wentwater by C.S. Lakin (Representative of the Gates of Heaven series. Yes, I've read them all, and am actually in the middle of reading the most current one.)

Books I loved that have gorgeous cover art. OK, so these aren't really from 2012. But, hey. They are great reads! And the sequel to Winter is out now. Check out Prophetess by Keven Newsome.

(And btw, I realized some of these books didn't actually release this year, but this is the year that I read them.)

Days of Blood and Starlight by Laini Taylor. This is the sequel to Daughter of Smoke and Bone, which I did reference in another blog post because the cover art didn't do the story justice.

These books are amazing. The writing is the kind of stuff that makes me feel like a total hack. And the story world is so rich and deep. Oh, and it's all about an artist with blue hair and lots of tattoos, who lives with chimeara and resurrects them.

These books in a word: Swoon...

A Tale Dark and Grimm by Adam Gidwitz. A retelling of the Grimm fairy tales, centered around Hansel and Gretel.

This book is middle grade, but I will warn you. Gruesomeness abounds. This is not a negative thing, imho, but some readers really had issue with it as revealed by Amazon reviews.

I read this to my 10 yr old daughter, and I just skipped past the parts I thought she'd have trouble with. She loved the book, though, and I found it to be incredibly well-written and the voice was awesome.

A little more gruesomeness with Anna Dressed in Blood by Kendare Blake. This book threw me for a loop. I was expecting a dark, haunting love story. But the book is written in the guy's pov and has that snarky teen voice that works great when done right and is like nails on a chalkboard when done wrong. Blake does it right, though!

Yes, there's a love story, but it's so different and the book is all action and...dark fun? Yeah, that's it.

And seriously--how can you not read a book with a cover like that?

Enshadowed by Kelly Creagh. This is the sequel to Nevermore, the story of Isobel the cheerleader who is stuck doing an English project with Varen the Poe-obsessed Goth, and they end up sucked into a dream world, and of course they fall in love. Oh, that's a lousy blurb. The story rocks. And Varen...

Anyway, the sequel has some shortcomings, but the writing is just as strong and lovely and dark and suck-you-in. In some ways it feels like the story doesn't advance, but it does when you go back and think about it. Totally looking forward to book number three! 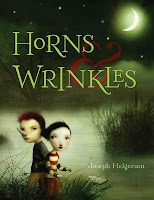 Horns and Wrinkles by Joseph Helgerson is a middle grade I stumbled upon in the used book sale at the library. I thought the cover was cute and that my kids might like it. Turns out, I loved it!

The voice is quirky, the story is quirky, the characters are quirky. I loved things like the author using the word "rivery" to describe strange things that happen because everything is attributed to the local river, where trolls live and other odd things. Yes, trolls. The story is about kids and trolls and bullies. Bullies with rhinoceros horns!

The Isle of Blood by Rick Yancey is the third book in the Monstrumologist series. This is a YA series and is full-on horror. Not paranormal. We're talking monsters.

And it is one of the most beautifully written series I have ever read. I have practically pounded people on the head in attempt to get them to read these books. Yes, they are gory. Yes they are gruesome. Yes they are freaking brilliant.

You may call me biased because Star of Justice by Robynn Tolbert is published by Splashdown Books, which happens to be who published me. But you would be wrong. This book stands on its own and I'm not the only one who has fallen head over heels for it.

Robynn's voice in this book is so strong, her characters so vivid, her story world so intricate. And it's worth the read just for the character Merritt.

This is an adult novel, btw. Older teens would have no issues with it, but I'd not recommend it for young teens.

The Windrider Saga by Becky Minor. Knights and dragons and adventure!

This book makes me think of medieval fairs and story tellers captivating the villagers with tales of daring deeds and chivalry. I could see the shining armor and hear the clanging swords and feel the icy breath of the dragon. (Yes, ice, not fire. Cool, eh?)

Classic fantasy with a voice that is refreshing among so many traditional fantasy novels that all sound the same.

Fairy tale and allegory, this book is both beautiful and fun. Adventure, dragons, giants, elves, fairies....and Ash. He is swoon-worthy.

Oh, and I'm sneaking another in with this. Blood and Brine by Caprice Hokstad, the last in the Ascendancy Trilogy an another Splashdown Books author. Another author I became friends with much because her writing impressed me, and because it's so unique. I know, I know. It's not fair using authors I'm friends with. But that's why I'm squeaking these two in together. Besides, I'm stopping now and moving back to one I don't know.

The Star Shard by Frederic S. Durbin. From my review on Amazon and Goodreads:

This book is...unique. The Rake is a traveling city, moved forward by the rowing power of giant creatures. With levels and trees...it is hard to imagine, but the author pulls it off. There is magic and mystery, and a touch of young romance. And dark. There were bits that reminded me of Neil Gaiman's work.

This book was really a pleasant surprise!

Oh, no! I've reached the end! But there are so many books I want to add!

Insurgent by Veronica Roth. Sequel to Divergent, YA dystopian

Winter Rose by Rachel Marks (a novella). YA romance

This Dark Endeavor and Such Wicked Intent by Kenneth Oppel. YA horror

And finally, if you haven't read or at least heard of The Name of the Wind and The Wise Man's Fear by Patrick Rothfuss....well, just shame, shame on you. You get no link from me :P.

Posted by Kat Heckenbach at 9:05 PM

Woo hoo! I made someone's top something-or-other list! I had really forgotten that was in the last year. It seems like forever ago that B&B was released.

Or I'm just getting old. Probably that.

Excellent! I picked up Shadow and Bone because I thought I was getting Blood and Starlight. Darn you, similar word-constructed titles!

Sigh...I know the feeling, Caprice! The getting old thing, that is :).

And yeah, Kessie, the Daughter of Smoke and Bone /slash/ Shadow and Bone thing bugged me, too.

I haven't heard of several of those. Kat, Incorrigible looks too cute! Plus - the name!

Hah! Yeah, I grabbed it because of the name--how could I not? :D It turned out to be so, so cute!