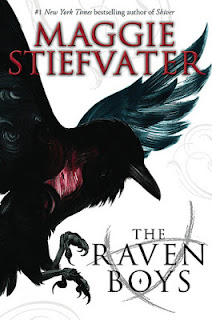 This is going to be a strange review to write. The Raven Boys was a book that made me wish I wasn't a writer. That is something I need to explain before I can go on.

Two kinds of books make me wish I wasn't a writer:

One--the kind of book that is so beautifully written I feel like a complete idiot thinking I have a right to even attempt writing. Books like The Name of the Wind by Patrick Rothfuss and The Monstrumologist by Rick Yancey. Those books just make me want to give up because what is the point if I'll never be that good?

Two-the kind of book with those little fiddly things that writers have drilled into their heads as no-nos. No adverbs, no telling, no head-hopping, odd shifts in voice/style, etc. Things that would not bother a normal person, but totally bug a writer who is new enough to still feel the drilling. (From what I gather, once you've gotten big enough, stuff like that doesn't bother you when you read. And it often doesn't seem to be a worry when you write for plenty of big authors either. I don't know--I'm not that far along yet :P.)  But the point is, I wish I didn't get bugged by this stuff--that it would just slip by unnoticed.

The Raven Boys was both. About 97% the first thing, and about 3% the second thing.

I spent most of my time reading completely immersed in the story. And when I say immersed, I mean it. Like, totally forgetting there was a real world around me. I could SO see the characters. So feel them. There were literally places where I found myself holding my breath. Chapter 36 was a big breath-holder.

The writing has such an intensity. The characters such depth. (Negative reviews on Amazon gripe about this. Really? You are going to complain that the characters are complex???) This book kept reminding me of the movie Dead Poets Society. The private school boys, with such different backgrounds, but such incredible bonds. And Blue was awesome. Strong but insecure at times. Sweet and funny. Different, and totally easy to relate to.

Aside--I was sitting at The Three Broomsticks in the Wizarding World of Harry Potter. With a butterbeer in hand. And what was I thinking? That I was looking forward to getting back to the hotel room that night to finish off the last 20 pages of the book. Yes, that is how much the characters stuck with me.

I don't want to give you more. This book is about searching, and discovery, and you need to go into it just with your mind open for anything possible to happen. And be prepared to love these characters.

But those fiddly bits. You know how tiny nicks or scratches jump out at you more when they are on a flawless surface? That's how it was. They jumped out at me more because the contrast was greater, I think. I won't nit pick individually, because as I said, it's stuff that *should* slip right by me. The only thing that bugged me enough to mention outright was that sometimes the characters' cuss words (the actual words) were in the dialog, and other times they "breathed a swear word" or some such. Those step-around-it-without-saying-it bits felt so contrived for some reason. Maybe because that's a device used when one doesn't want cussing in a book at all, and it's used sparingly. It was both used combined with actual cussing (so what's the point?) and overused here. And there were moments that felt to me like the voice of the story changed--just for a sentence or two--and it took me out of the story.

And I have to admit, the ending left me a bit wanting. Not just because there is more to the story, but because it felt clipped, rushed.

Still, the awesomeness of the vast majority of the story makes up for the fiddly bits. And I will totally read the next book! And despite feeling like a hack in comparison, I will not give up writing :P.

Posted by Kat Heckenbach at 9:07 AM

I've seen this book reviewed in other places, and I thought it sounded interesting. Unfortunately, it's one of those books with such a twisty plots that nobody will talk about it much. It's too bad there were a few little fiddly bits you didn't like. That's how you know you're in editing mode, when you catch yourself wanting to edit everything. :-p

Yes, twisty plot. And it looks to get even twistier in the next book, I think.

I will say this, now that I'm thinking about it. Some Christians may have a hard time with the book. The magic in it is "real" magic--as in fortune-telling and contacting spirits. Books with that don't bother me--I see it as fiction even if that stuff can happen. But others may differ.

But the reason reviewers won't give stuff away is that readers would be MAD to have seen it coming :).

I read Shiver and Linger by the same author so this book was on my radar. Moving it to my TBR list now, but might wait until book 2 is closer to release?

I loved Shiver and Linger. Did you read Forever? The last of that series. It was good, too. Although my favorite remains Shiver.

It'll be a hard wait for book 2 of this one, but I'm glad I read the first one already.

I haven't read Forever --didnt know it existed! Will be looking for it now...

Brilliant! This is a really marvelous stuff for me. Must agree that you are one of the coolest blogger. I was curious to see a stuff like that. Fabulous post!