A Rosary of Stones and Thorns: a review of sorts... 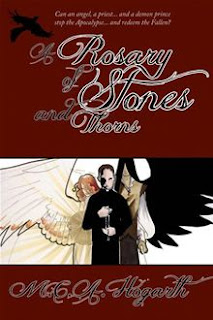 I finished reading a book (A Rosary of Stones and Thorns by M.C.A. Hograth) the other day and I can't stop thinking about it. I'm sure that was the author's intent. I wish I knew what drove her even deeper.

The back of the book has this disclaimer:


This story is a work of fiction and not intended as serious religious commentary.

It is the story of an angel who has been literally thrown to Earth from Heaven for standing up against the archangel Michael. Why does she do this? Because she finds a room that holds the halos of all the fallen angels, including Lucifer's, and believes they are being held by God in hopes Lucifer and his followers will repent and return to Him.

In other words, it delves into the idea that God would be merciful enough to forgive Satan.

But there's more, and I'm afraid *I can't go farther without spoilers. So you are duly warned.*

In this story, Lucifer created hell as an alternate heaven--a place where souls are welcome when they have not followed God's laws well enough to enter Heaven.

Oddly, I could buy this. Not in real life, mind you--but for story's sake. I got no gut-sick feeling over the idea of this being used in a work of fiction.

However, a  few things did not sit well with me. You see, in the book it's Michael who determines who may stay and who must go. Where is God in this? Would God allow Michael to make those decisions? Would God allow interpretation of His laws like that in Heaven?

At one point, a woman holding a baby enters hell's gates and says that she was to be allowed into Heaven but her baby was not. She couldn't bear the idea of her baby's soul dying (what the book calls being "taken by the Wind"). This seems so backwards to me. I could not understand the point, unless it was to show us how our children would be lost, even the most young, if a checklist must be completed in order to enter Heaven.

And the real biggie. In the story one of the main characters is a Jesuit priest named Steven. He is the one who finds the banished angel and rescues her, and goes with her on the quest to mend the war between Michael and Lucifer. Yes--it's between them since it is Michael who is running things. It's a war between two leaders who each believe they are actually following God's will. It's just that Lucifer is willing to leave God's presence in order to follow that will.

Anyway, now the real biggie--Steven finds a cross in hell...THE cross. He drops to his knees, overwhelmed by emotion. And Lucifer comes to him, tries to comfort him, claims that he'd tried to save Jesus' soul from being "taken by the Wind" but was "too late."

I'm not sure what this is supposed to represent. Why would Jesus, if He lived a sinless life, not be allowed in Heaven? Was it rules? Did Michael turn Him away because of rules? If He had to follow rules to get into Heaven would Jesus have been turned away?

I don't know exactly what to think about this book. I'm sure there are Christians that would be outraged by this book. I can hear the cries of blasphemy now...

But I am finding it very hard to be upset by it.

First of all, the writing is really, really good. I mean, it's self-published, but other than a handful of typos and not-so-great cover art, you would never know by the writing. Wait, yes, I know, trad-pubbed books have typos and can have bad cover art, too. I'm stereotyping. Yes. But it's just to make a point. Deal, please.

Second, I cannot tell by the author's writing where she stands faith-wise. I met her at the Necronomicon, and she said she finds herself writing a lot of stories about forgiveness. This is the only work of hers I've read and have no idea if her other writing uses Christian elements. I find the fact fascinating, though.This is not like Philip Pullman's books. God is not made out to be a bad guy. At. All. There is SO much about His love in this book. The way it draws the angels, strengthens them, heals them. Lucifer misses God in the story, loves Him.

Third, as you can see, this is making me think. About MY faith. Not doubting it by any means. But pondering what makes it tick. What would God do in the face of Lucifer's repentance? How angry might I be at the idea of Jesus dying a permanent death?

Yes, there were things that didn't get completely explained--like, where was any reference to Jesus' resurrection? If He was "taken by the Wind" that would imply He never rose from the dead. That jibes not well with me. But, again, I'm not sure where this author is coming from. I cannot hold her to my particular values and beliefs if she doesn't share them.

Still, she's stirred the pot for me, and for that I give her props. And for writing a well-crafted novel. If you can handle the "theology" of this novel, I'd definitely recommend it!

(PS--the cover art. The actual *artwork* on the cover is well done and I believe is the work of the author herself. It's the layout that doesn't work for me. The solid color is too much, the font is hard to read, and the artwork is hard to see because it's too small in relation to the cover as a whole.)

Posted by Kat Heckenbach at 4:03 PM

Sounds like universalism, where God forgives everybody at the end. And if she's making the point that Jesus is still dead, did she ever mention that Jesus is God?

It sounds interesting. Like it explores some weird theological ground, but like she said, it's a fanfic, not serious theology. About like reading George MacDonald's Lilith. That got into some universalism, too.

Yeah, I have a feeling she's not a Christian, and I did read a few things on her blog that give me the impression she's kinda new-agey. Still, I found it interesting. At least it didn't feel at all Philip Pullman-y. You know how I feel about his stuff!

The book sounds interesting. I agree that it sounds like Universalist theology. If you've met the author, I'm wondering why you wouldn't engage her in conversation over the questions you've raised? It seems like an opportunity. Plus, now I'm curious. Don't leave me hanging...
:)

Lisa--I do intend to talk to her about it. But I wanted to get my thoughts out first, and not let them be influenced by her personal views (or the possibility of her refusing to share them). So what are you saying? I need a follow-up post? ;)

I'm very interested in knowing where she's coming from. And not only because one of my Sunday School students asked wht our creed says Jesus "descended into hell." Hograth sounds like she got that part but missed the rest of the story...