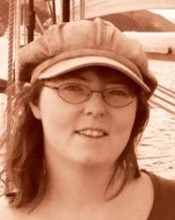 Most of you know I'm published by Splashdown Books, which is an indie publishing house owned by a Space Kiwi named Grace Bridges. Did you know she's a writer, too? An amazing one, at that....

How did you get started writing fiction?

When I was nine, my Nana gave me a hardbound notebook. It looked like a real book, so I thought I had better write one in it. I started by carefully numbering all the pages in the bottom corners. Then my Dad started me off with a generic story prompt “Zebra” which I managed to spin into a long-running illustrated science fiction tale alternating between infantile cops-n-robbers in space and ripping off recently-viewed movies.

How do you incorporate themes and purpose into your work, or do you?

Not deliberately. I feel these things need to be organic. Story must come first. You can have a great story and a fun read without a theme, but a themed story can be pretty lame sometimes. If a theme suggests itself then I am happy to exploit it and increase its power, but I won’t add an artificial one just for the sake of it. 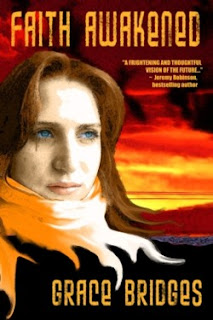 How would you summarize your style of writing?

Info on Faith Awakened
Ireland as it has never been seen before - in a future where hope is hard to come by. Mariah, living in the dark time after the advent of a one world government, seeks the light in the underground Fellowship of the Awakened. Shortly afterwards, nearly the whole earth is silenced, and she struggles through the shock with a handful of survivors. Yet the danger has not passed away entirely, and they are forced to fight for their lives using an untested technology.

Faith, too, grows up in Ireland, but it has little in common with the homeland Mariah knew. Sometimes she thinks her life is perfect, asking herself, "If this is a dream, when am I going to wake up?" Other times it seems repetitive and monotonous. She experiences much to delight her, but also suffers from inexplicable bouts of amnesia that rob her of the past again and again. Seeking answers, she travels much in the free world, where disappointments and successes vie for the upper hand until she finally finds fulfillment in spite of all her disasters.

One of the trailers from the Faith Awakened campaign of 2007 (filmed in Germany):

Posted by Kat Heckenbach at 5:40 AM

What rankled me about that cover blurb was the Conventional Christianese:

Mariah, living in the dark time after the advent of a one world government, seeks the light in the underground Fellowship of the Awakened.

I must say, there is NO mention of an anti-Christ or end-time prophecy or anything like that in this book. It's got a persecuted Christian vein--that I will admit--but it's not at all "Left Behind."

The dystopian part has to do with the government using people as slave work and basically controlling them by controlling their food supply, and someone comes up with a way around that, a way everyone can grow food very quickly, but it gets out of hand and spreads a plague. The characters use VR to escape the plague.

No end-times. No anti-Christ. No second coming.

Kat, Grace, that is the baggage you have to carry, forged from decade after decade of Conventional Christianese fiction. Where the only Future Christians are permitted to have is the No-Future of Late Great Planet Earth and Left Behind.