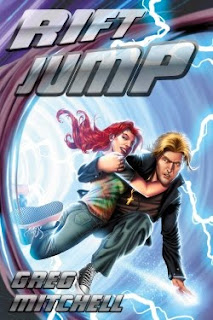 Y'all know I adore cover art, and the stories behind the art. So when my publisher, Splashdown Books, revealed the art for its newest release, Rift Jump by Greg Mitchell, I got a little giddy. It's so cool, is it not? And the story is a genre mash-up of epic proportions.

First, about the book:

The day Michael Morrison died was the day his life began.
A sinister threat is growing in the void between realities, and Michael has been recruited to stop it. Ripped from his own violent life, he is sent rift jumping to other worlds seeking out the agents of the Dark and putting them to an end by any means necessary. The love of his life, Sara, joins him as he battles Civil War space ships, sea serpents, superpowered humans, and even his own duplicate from a parallel timeline.
But the darkness he fights is growing within him too, calling him to the same destiny as every other Michael from every other world. If he is to change his fate, he must learn to love, to forgive, to trust, and to let the man in the Stetson guide him to become the warrior of the Light he was always meant to be.

Check out the prologue--but make sure you come back and learn more about the awesome cover art!

What is the story behind your cover art?
I’m really thrilled with how the cover turned out for Rift Jump. I had been drawing Rift Jump’s heroes—Michael and Sara—since high school, so I was VERY particular about their hair, their clothes, even down to their eye color. I originally had a different artist lined up for the project, but he was buried beneath tons of other work and it didn’t look like he was going to make the deadline. So I contacted my friend and Marvel Comics colorist Thomas Mason. He was in between projects and graciously accepted my humble offer.

I already had the concept in mind: Michael and Sara barreling through the rift, passing between dimensions. I had even decided I wanted it to be a wraparound cover with the sheet of paper that they use to enter the “In Between” on the back. Thomas had this brilliant idea of using surfers as an inspiration. He drew Michael kinda crouched down like he was surfing through a water tunnel. What’s cooler is that, if you look closely, Michael’s got his hand out, running it through the time-space continuum like surfers do with waves. It was a great touch. Plus, Thomas is a master when it comes to doing digital lighting and creating these really intricate and stunning special effects. It’s a beautiful cover.

What was your experience like working with Splashdown on your cover art?
I brought my own artist onto the project and worked with Thomas exclusively, harassing him as we headed closer to our deadline. Once he finished the art, I handed it to Grace—my esteemed publisher—and she put the text on there. I had already settled on a font to use for the main title and Grace and I discussed ideas on formatting the text. Grace did a great job of capturing my vision, plus putting some neat touches into the final product. If you notice, the title is actually a bit transparent, so that even more of Thomas’ art is preserved. 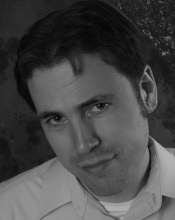 Visit the following blogs on this Splashdown Blog Tour for upcoming features of Rift Jump by Greg Mitchell.

Posted by Kat Heckenbach at 5:53 AM