Contemporary and Classic: Can They Both Be Complex? 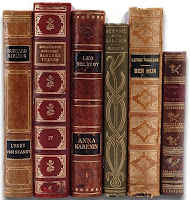 As a homeschool mom with one kid in middle school and one soon to be, I have been thinking a lot about what books--what literature--I want them to read. My son is already an avid reader, having devoured several contemporary series. He's been a strong reader since the age of four and has developed a distinct taste in books. He loves the fantasy works of Brandon Mull (Fablehaven, Beyonders), a series called Vampirates, and pretty much anything set in ancient China or ancient Japan.

My daughter's taste is quite different, though, and being auditory where my son is visual, she prefers I read to her. She understands better when I read to her. She loves Little House on the Prairie, A Little Princess, Black Beauty, and others of that ilk.

In other words, she loves classics. The problem: she can't understand the originals and I have had to read abridged versions to her. There was this part of me that felt soooooo guilty about that. As if my high school English teachers might find out and come to my house, shaking their heads with disappointment. As if my fellow writers would find out and tsk, tsk.

But, honestly, I see nothing wrong with putting classics into contemporary language.

Don't get me wrong. Classics as written are awesome. Some amazing stories there. But the way they are written reflects the speech patterns of times long gone in many cases.

I was in all gifted classes, and like my son I read at an early age. But trying to read Shakespeare sent my brain into screaming fits. I adored the stories and characters, but I felt like I needed a translation guide. Like I was in a foreign country where I didn't know the language.

I believe that's closer to the truth than a lot of people would like to admit. Elizabethan English IS like a foreign language. Maybe a whole lot of the words are the same, but the sentences are structured differently, ideas are expressed with phrases not used anymore. It is NOT just a vocabulary issue. I have a large vocabulary, as do both my son and daughter.

Defenders of classics in their original form sometimes get a bit ruffled at that idea. As if  you're somehow uncivilized because you read books written in plain, contemporary English. Low brow. And, well, frankly, just not as smart.

I've read a lot of complex contemporary books to my daughter. Books with deep stories. Stories that really delve into the characters and require a lot of "thinking". We got some great discussions out of those reads. But when I tried reading the original Treasure Island, she was lost from page one. It's the language. She's not ready for deciphering the sentence structure and flowery language. She can't follow a sentence that fills seventeen lines in a paragraph.

One of the reasons writers are taught to write the way they do now is that it's our job to communicate to our readers.


Does that mean dumbing things down?

My novels are not dumbed down. I don't use a plethora of mountainous vocabulary words, but the story is complex, the characters are complex, and reading it requires thought. (Truth be told, I've had a couple readers complain about that fact. "Ugh, I had to think about it too much.")

One thing I see happening is a reverse of simple language and complex thought--writers pumping out flowery, deep-sounding writing that, if it were to be put plainly, would have very little substance underneath. (You don't get what I mean? When's the last time you listened to a politician talk?)


My point in this little diatribe is this:


Dumbing down has nothing to do with sentence length or the use of contemporary language. A novel written concisely, efficiently, clearly--in a contemporary manner--can be just as literary, just as thinky, as a classic with all its mystical prose and lovely turn of phrase. There is no reason to write circles around your readers. I'm not saying one should never go for more...flavor when writing. You love that classic verbiage? Go for it. I'm only saying that more simply phrased writing can be just as deep and meaningful if it's used to build real story.

I think your daughter will be able to read the original versions once she's older. It has everything to do with comprehension level. I remember chewing through The House of a Thousand Candles when my reading level was barely up to the challenge, but I loved it anyway.

Not to mention that books like Black Beauty are full of propaganda against things like the check-rein that we don't use anymore and don't know what they are. (I'll bet she'd understand the Black Stallion books!)

I didn't think any modern writers tried to write like classical writers anymore. Then I read the Temeraire books. My gosh, it's like reading Horatio Hornblower with dragons. The awesome is awesome.

I agree, Kessie. She probably will be able to understand the language later on. I just don't think I should have to force it on her now for the sake of preserving some sort of literary law if I know she's going to love the story behind the writing.

And if she doesn't someday get the original writing? What if the language is still a barrier when she's a teen? Or an adult? Should she abandon the story? If the language is what *makes* the story, then it is all surface and no substance, imho.

I mentioned my brain-block for Shakespeare when I was high-school. That block is still in place. I cannot get my mind to wrap around the words as they are written in his plays. BUT, when it's all put in contemporary English, I adore the stories!

And I'm not at all condoning poor writing, or dumbed down writing. I just mean, I have found myself completely sucked into stories, stories that have real depth and in my opinion strong literary merit, which were written in a very contemporary style. Well-written contemporary.

Good writing is good writing, whether it's contemporary or a century ago. Why else do we still shiver over the Turn of the Screw?

And there's no point in being a language purist with kids. We have a bunch of abridged, illustrated classics. My kids sit and stare at the squids in 20000 Leagues under the Sea and beg to know what's happening. One day we'll work up to the real book.

I don't understand Shakespeare, either. But there's this weird thing that happens when you watch movies that use the original language (I think there's BBC productions). About halfway through, you start understanding it in a subliminal way. I got all the way through Hamlet and went, "OMG I understood what happened!"

I saw Hamlet in the theater with a friend who is a Shakespeare nut. She whispered her translation to me through the whole movie ;).

Shakespeare is not MEANT to be read. It's not even meant to be *listened to*. You really need to go see a play ACTED OUT. Many of the archaic phrases can be figured out through actions, body language, and inflection. I shudder to think that 100 years from now, poor kids in school would be forced to read a screenplay script of The Avengers and have to figure out all our crazy no-longer-in-use expressions but never get to SEE the actual movie!

When I was in high school we were forced to listen to these horrid dramatic recordings of Shakespeare's plays. You are right--not seeing the action made everything so confusing. Well, that and the fact I could barely understand the actor's words because their accents were so thick and their voices so screechy.

I know what you're talking about. One of the problems with a lot of English lit classes is the stories are so odd and unintelligible at times. At least when I was in school (During the 70s). I was bored with most of them. If I hadn't already been reading on my own books I liked, like sci-fi and fantasy, I'd probably though reading wasn't for me.

I've always opted for more easily understood language, and agree, doing so is not dumbing down. It's communicating. Which if you don't do that, you've lost.

Yes, Rick. It's communicating. I think sometimes people forget that. Writers do need style, but if it gets in the way of communicating, rather than enhancing it, then it's defeating the purpose.

That "weird thing that happens" - it totally happened to me when I read my first novel in a foreign language. At least half the vocabulary was unknown to me, but I wasn't about to look everything up. So I ploughed on, and somewhere along the way I began to understand the story even though I couldn't understand all the words. I find the same is true for old-fashioned language, and I actually like that stuff (if I don't happen to be tired!). I do know that it's contributed to my writing style!

One of my favorite books when I was young was The Mysterious Island, by Jules Verne. But when I tried to read it to my kids several years ago, I couldn't believe the archaic language and the lengthy description.

Lengthy description is something that I've found to be an issue with some older work as well, Sally.

Another thing--author intrusion. For example, "The Picture of Dorian Gray." Lord Henry rambles on and on about his views on society, and it has nothing to do with the story. I loved that book in high school, but when I read it again a couple of years ago, I hit the end and thought, "This should have been written by Poe. It'd have been even better, because Lord Henry would have died right off." :P

These days a character like Lord Henry wouldn't have been allowed in a book because he was used strictly as a device for Wilde to insert personal commentary, imho.

Oops, Grace, missed your comment! Your writing may be influenced by old-fashioned language, but your writing itself is not old-fashioned! It's just got a very classic feel to it :).