Keep Your Eye on the Goal?

I've already mentioned the guest post I did at Speculative Faith last Friday. It involves paradox. Oddly, my  entire life lately has felt paradoxical. I was even thinking of writing a post listing all the different things that feel that way. But today, one thing stood out really strongly.

In my church small group, we're doing a Rick Warren study that talks about the phases we go through when pursuing our dreams. First, we must have a dream and confirm it's Gods will for us. Then we must decide to pursue it. Then there is usually some sort of delay--we don't just go straight to the goal. Following and/or along with the delay is difficultly. Then, we often feel like we've hit a dead-end. But once we plow through that, the dream is delivered.

This morning my pastor spoke on dreams and goals. He used the movie UP as an example. In the movie, Carl and his wife have a dream to live atop Paradise Falls. But life takes them on some twists and turns, and after years of marriage, his wife passes away--and they had never followed through on that dream. Carl decides he must get their house to Paradise Falls. Of course, his plans hit a snag when little Russel ends up going along for the ride.

My pastor chose to show the clip where Carl finally gets his house on the top of the falls, and realizes it's not what he thought it would be--that really it was the adventure of getting there that was important, but he'd had his eyes so firmly on the goal he'd missed out on living after his wife died. 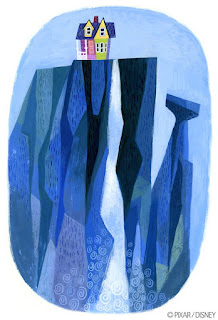 NO, this is not one of those "the goal is really the journey" posts. Sometimes I hate those. It often feels like justification for not reaching your goal. Like as long as you work hard and smell the roses along the way, who cares if you never actually accomplish what you set out to do. I have a very hard time with that.

Sometimes, our goal is really the first step in a longer journey to a farther goal. Carl had to get to those falls before he could let go of the stuff he'd been holding onto for so long--the stuff that was weighing him down and keeping him from the whole new set of adventures he was meant to have.

But another thing that I got from this morning's message was the idea that if we can let go of that baggage--that if we are at least willing to do so--we can reach our goals faster.

I wonder so often why I focus so strongly on writing. I have had many other interests and career goals that I never followed through on, and it has never bothered me. I thought from the time I was a kid until I was a good year or so into college that I wanted to be an artist. I started off in college with the intent of teaching art. But I found myself dropping that dream and switching my major to biology. I got my degree, but never went on to grad school and never pursued a job in the science field.

After college I took a couple of odd and unrelated jobs--I worked at a veterinary office and then at a Montessori school. Finally, I ended up at Sylvan Learning Center tutoring upper level math and reading. I thought I'd found my niche. I loved teaching teens, I loved teaching math. I never felt loss at not using my art skills or science education. And then I got pregnant with my son, quit to be a stay at home mom, and decided to homeschool. No regrets about leaving Sylvan at all.

I still don't regret not pursuing art as a career. Nor do I pine over not getting that PhD I promised myself. But I can't seem to let go of the idea of being a writer, of being an author, of having my books in bookstores, on people's physical shelves at home or their ereader shelves, of having people love my stories. I've never been so passionate about a goal before. And I don't know why.

Writing is the most difficult, the most frustrating, the most emotional journey I've been on. Nothing about it has been what I've expected. Publication has not come at all like I thought it would, and marketing and book sales is something that makes me want to scream at times, cry at others, and overall indulge in far too much chocolate. 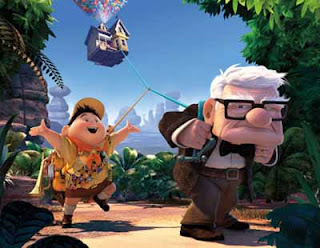 And after this morning I am wondering if the reason I am feeling so frustrated by this particular endeavor is that I can't imagine letting it go. I feel like Carl, eyes set on Paradise Falls, dragging a house full of stuff behind me--everything I've attached to the idea of authorship. I wonder if maybe I need to at least be willing to let go of the idea of being an author, of saying maybe that's not the goal God has in mind for me. Am I missing out on the next big adventure because my sights are set too firmly on that one step?

Carl did get to Paradise Falls. It's not like he was made to turn back. But if he'd dumped all the junk from his house in the first place, he'd have flown there faster, seen sooner it was time for another adventure, something even bigger and better.

I simply can't help but wonder: Am I slowing down my own flight by holding too tightly to it? Or am I just flying in the wrong direction altogether?

There's a couple of articles on The Kill Zone that might help you out.

In fact, there's been a bunch of posts like this lately. If you just cruise the latest stuff on the blog, you'll find it.

Thanks, Kessie. Good posts! And I can always count on you to come in here and say, "Persist!" :)

I do want to clarify. I'm not saying at all that I'm thinking of giving up. This is too important to me. But I wonder if the stressing over the importance of it is slowing me down, creating drag. Taking away the "explosion" mentioned in that first post you linked to. Does that make sense?

I love writing, and when I *stop* thinking about how many sales I've got so far, how many I haven't got, how I'm supposed to be marketing, blah, blah, blah, then I make *progress* with my writing. Progress with writing means more material out there. More material means, hopefully, more sales.

I just don't want me not reaching Paradise Falls to be my fault, because I was insistent upon dragging a houseful of baggage, of expectations, of it-must-be-done-this-way, along with me.

I wish there was a like button. :) really not much to add, but I hear your heart as I think we all are at places in our lives balancing our dreams and reality, and trying to figure out what's really going on. This is the second post I've read about letting go...yikes...I wonder if God is speaking something to me...

Remember the difference between expectancy and expectation, as explained in The Shack? I think as long as you have confirmed that your dream is from God, then all you need to do is keep living it and let God do the worrying. Abandon your rigid expectations, worries, and fears into his hands, since you can't manage that stuff nearly as well as he can, and just do the stuff he gave you the dream, talent, and ability to do.

Thank you, Jennette. It's so hard to let go when we want to be in control, isn't it?