I've given a lot of thought to names the last couple of days. You see, we are getting another dog. My beloved Boxer, Rocky, died last November and we have an opportunity to rescue another Boxer. This one is female.

Like Rocky, she is already named. I would never have named a Boxer "Rocky" but it did, in the end, fit him quite well and I grew to love the name because it was part of him. I hope to someday learn to love the new girl's name, too, but right now I'm having a little trouble with it.

I'm not entirely sure that's how it's spelled, but I assume it is the traditional spelling or some common derivative like Krissy or Chrissi. No offense to any Chrissies out there, but the name conjures images for me that I don't want associated with my dog: a bleach blonde beach bimbo, thanks to the show "Three's Company" and the character Chrissy Snow...

That simply does not jibe with: 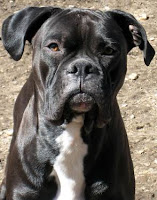 No, that's not actually the dog--it's an image I found on Google, but you get the idea. The dog obviously has more brains than Chrissy Snow, and more class, thank you very much.

However, the dog is now almost two years old, is very used to her name, and the woman/foster dog parent we are getting her from is the one who named her. She is terribly sweet and loves the dog very much, giving her up only because they have their hands full with three other Boxers. I do not want to make this experience even more difficult for either of them, and have therefore decided to find some way of living with this name.

One idea I had was finding another mental connection. Could Chrissy be the shortened version of the name of a character from one of my favorite sci-fi/fantasy books or movies? We already have one dog named Dax--after Jadzia Dax from Star Trek DS9--and I love naming pets that way. If you have any suggestions, I'd love to hear them!

The other idea I have is to change the spelling. As a writer, I often choose character names for the way they look on the page. For example, my one character Siophra. No one ever pronounces it the way I do, and I have no idea if I'm even pronouncing it "right." But it just looks lovely. The shape of the word, the lay of the letters. So, maybe if I change the spelling to Krysy...or one step further to give it a real fantasy feel by adding an apostrophe: K'rysy. :D


It inspired me to share a few tidbits about names in Finding Angel:

The name Angel was never intended to stay in my book. I picked it because my daughter was going through a phase of naming every-freaking-thing Angel (dolls, stuffed animals, etc.) and it was quite literally the first thing that popped into my head. BUT, it worked out for the story, as its letters became plot elements....

I already told you how much I love the name Siophra for how it looks on the page. But according to Behind the Name it actually comes from the Irish name Siofra which means "elf, sprite" and Siophra is Elven.

Several of the names come from famous scientists. Gregor comes from Gregor Mendel, who is given credit for being the founder of the science of genetics. Sir Benjamin's last name is Punnet, which is taken from Reginald Punnett (yes, I changed the spelling) who is most well-known for the Punnett square. And there are two minor characters with the last names of Watson and Crick, taken from the pair of scientists who discovered the DNA double helix.

And lastly, my favorite, Kalek. He's an Elven rocker and I based him originally on a singer/musician named Caleb who attended my old church. Of course, I changed a lot of details about him, including giving him pointy ears, onyx eyes, and tattoos. Since I didn't actually know the guy personally, I couldn't (and wouldn't have most likely) base anything about Kalek's personality on him, but I chose him in honor of his wicked talent.

So how do you go about choosing names? For characters? For pets? For children?
Posted by Kat Heckenbach at 9:56 AM

My daughter suggested that name as well :). I think I want to keep the pronunciation the same though, as a thank-you to the woman we're getting her from.

What about Krysi? I can't wait to see my new granddog, so please send me a picture after you get her on Saturday.