Got Horror? You Must Be Glorifying It...Right? 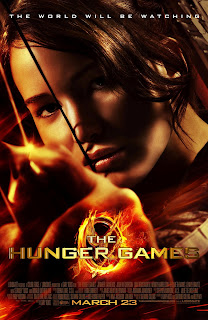 I woke up this morning to find an email in my inbox--a post on a fiction writers loop of which I am a member--that contained a nifty little diatribe against The Hunger Games, touting it as horror and as a book that promotes teen gang violence.

A story in which teens must hunt to survive, and are FORCED by a corrupt GOVERNMENT to participate in a brutal game in order to not have their district starve. Teens who are not violent by nature, and who want nothing more than to not have to participate. Sure, some are raised as warriors, but they have it drilled into them their whole lives--it is not a choice they make.

The biggest issue I had with this person's take is that she's judging the whole series based on the first book. If she continued, she'd see that the story turns to one of rebellion against this government that has oppressed the people for so long. It's about abolishing the violence of the Hunger Games, not encouraging it!

I recently posted on THE CHEESECAKE THICKENS about this very thing--people taking certain things, like violence and horror, out of context. Not reading the whole story, not listening to the whole song, not watching the movie through to the end--and then making the judgement that the book/song/movie is glorifying those things. Go check it out and tell us what your take is on the topic.
Posted by Kat Heckenbach at 6:41 AM

Email ThisBlogThis!Share to TwitterShare to FacebookShare to Pinterest
Labels: glorifying, horror, taking things out of context, The Hunger Games, violence

That reminds me of everytime I see an unfair review on amazon on anything and the reviewer states they didn't bother finishing the book/movie and still felt that they should "warn" others of how terrible the product was. The horrific (yet memorable) death scenes can be more terrifying than most horror movies, but in the other two books, they're given more provocative depth and emotion, especially with how they're used and in what contexts.

I have left reviews on Amazon for books I've not been able to finish--but it's because of writing rather than content. If I can't follow the story, find the writing irritating or just plain bad, etc., then I feel fine "warning" people about the book.

But content is different. Flagging a book as evil when you have only read the beginning is not something I would do. Actually, even with Philip Pullman's Dark Materials I didn't pass judgment till book 3 (and then finally looked him up and discovered his anti-Christian personal beliefs which supported my judgment).

I happen to be on that same loop, and I thought that your response came across as very thoughtful and well-reasoned. I appreciated that you jumped in to the conversation! :)

Thanks so much, Sarah!