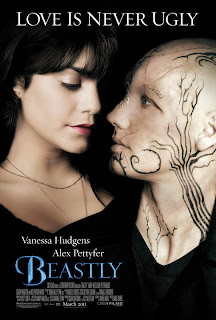 I don't normally review movies on here. Actually, I may have never reviewed a single movie on here...not entirely sure, too many posts to keep track quite honestly. So why am I doing so now? Well, I remember the first time I saw the preview for Beastly. My immediate thought was, "Wicked!" A modern day twist on Beauty and the Beast, one of my favorite fairy tales. It just looked too cool.
And then I read some reviews.
"Less than glowing" would be an understatement. Everything was bashed, from the acting to the plot to the dialog. I was so disappointed. I'd really wanted to see the movie, but now....
Oh, wait! What am I saying? Since when do I listen to the critics? I mean, yeah, one of the reviews was actually done by a teen on a teen blog, which in this case I'd give more merit than a "real critic," but I make my own decisions.
So, off to the movies I went today. And guess what? I liked it!
I saw no issue with the acting. Actually, I thought it was pretty good. Especially Will, the tutor, played by Neil Patrick Harris. I thought his character was great. And Kendra...played by Mary-Kate Olson...she was too cool.
The plot worked for me, too. The dialog had hokey moments--just a couple, and only mildly. Seriously didn't bother me at all. Was this Oscar material? Doubt it. Was it a great way to spend an afternoon? You bet.
The ONLY issue I had was the overuse of cussing, mostly in the beginning. I thought that was totally unnecessary. I mean, I've got no problem with cussing in movies, but I've seen plenty of R-rated flicks with way fewer curse words. I honestly think it was all thrown in to bring the rating up from PG to PG-13 because otherwise the movie was quite clean. It's just that Hollywood thinks teens won't see anything below a PG-13. Makes me mad, actually, but I don't blame the movie for that!
Anyway, I guess I'm the odd man out when it comes to Beastly. I'd totally watch it again.
Posted by Kat Heckenbach at 7:44 PM

I am so out of it when it comes to movies. I see maybe one movie a year in the theater, and the rest when they hit DVD. But perhaps someone can explain why the poster has two unrecognizable faces and names and yet Neil Patrick Harris and Mary-Kate Olsen (BIG recognition names) are in this movie? I mean, even if they are not the main stars (and what dumb casting dierctor decided THAT?) they still should have given them better billing because that alone would make me a lot more interested. I may rent this one when it hits DVD now that you told me that, Kat. It'll probably be out around September, I guess.

Well, Caprice, I think it's an age thing :P. I don't know the two leads, but teens do, and that's who this movie is aimed at. Even my daughter, who is only eight, knew the female lead. And once she told me, then I recognized her.

Still, I like Neil Patrick Harris, and am glad to see him ridding himself of the Doogie Howser persona :). Although, I couldn't quite get Dr. Horrible out of my head while watching...hehe...