The Art of Faith Awakened

Today, I'm handing the reins to Grace Bridges of Splashdown Books, so she can tell you in her own words the process she went through for creating the cover art for her first novel, Faith Awakened:
A little background on the book: I came up with the basic idea when I was 14, and it went round and round in my head for years until I started writing it at 21. I guess I got about a third of the way through before my career got in the way. It was 2006 before I got back to it, and finished it in its seventh year.

Around the same time I was just getting into the online life and chose Myspace as my first foray. There I met Daphne Sonneveldt, a Dutch artist and photographer living in Spain. She read my blogs about the developing book and completely without any provocation, she designed a picture for the cover. The model is actually Daphne's sister whom she photographed before applying a painted texture via graphic editing and then combining her with a background photo Daphne had taken at sunset in the mountains. It looked like this: 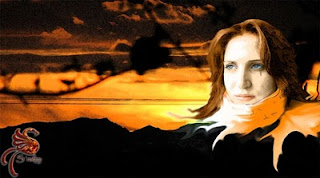 I was ecstatic. It seemed to capture the feel of the story almost perfectly. Almost.
I didn't know a lot about design, but I did know that the colour red is always eye-catching and that the eye should flow from the spine towards the open pages of the book, meaning we should flip the face the other way. I also wanted a piece of the ocean in the image. Here is what Daphne came back with: 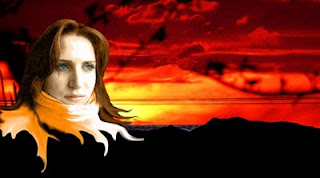 After that, all that remained was to ask Daphne to move the face to the right-hand side of the image where it would land on the front cover of the wraparound image. I then cropped it to the exact measurements for the cover template. 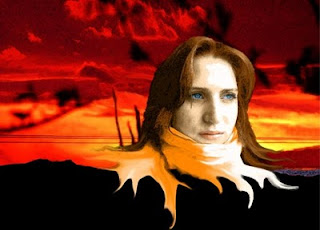 Interestingly enough I had attempted a cover image myself with the oil pastels I had on hand. It came out rather messy, but the concept remains very similar to Daphne's - and she never saw my version! 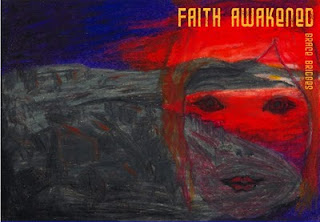 I also used Daphne's brilliant red sky in an image that sums up the prologue for me: a very dramatic scene where Mariah and friends rush into the old warehouse to the devices that could save their lives. 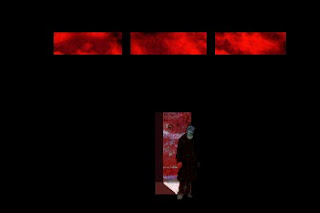 Anyway. I added the text and tweaked it some, which was just as well, because it turned out to be the same font used on Frank Creed's Flashpoint, which I think was released one day before or after mine. 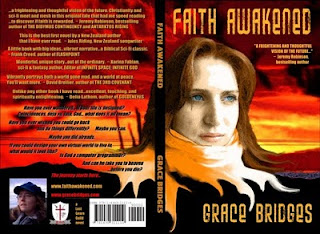 Daphne mostly does photography these days and you can find her at http://srafimdesign.deviantart.com.

I still love this cover very much, the perfect wrapping for the book of my heart, my first literary baby. Reviewer C.L. Dyck said of it, "The compelling jacket design of Faith Awakened is an accurate signpost of the vivid, unusual journey within." That is possibly my favourite thing anyone has ever said about the book, and it's only right that Daphne's wonderful work should be such a large part of it. I am honoured that such a designer wanted to work on my project.
And I can't end this without saying it...."Grace, you rock."
Posted by Kat Heckenbach at 7:40 AM

Hey Grace thanks :D. BTW I am back in business, regarding designing book covers. ATM I am building up my portfolio, so the first 5 book covers (for any writer) iam going to do for free. So spread the word :D