Art for a Muse

We're closing in on the end of this series. Two more books to go and we've pretty well covered the Splashdown Books current catalog. As a reminder, I started this series because I personally did some artwork for books at Splashdown, including cover elements for The Duke's Handmaid and Nor Iron Bars a Cage by Caprice Hokstad, and interior art for Tales of the Dim Knight by Adam & Andrea Graham. I got to see first-hand the progress of the cover work for Alpha Redemption by P.A. Baines. I find the process fascinating, and wanted to share even those I didn't personally have a hand in, so last week I told the story of Grace Bridges' Faith Awakened cover.
TODAY, I'm turning my focus on the book that led me to Splashdown Books in the first place. The Muse, by Fred Warren. It was Fred's story "Angel Wings" at Digital Dragon Magazine that introduced me to his writing, and I immediately bought The Muse as a result. So, Fred, I owe it all to you, man.
OK--on to the cover art!
I got the details from Grace Bridges, owner and head honcho at Splashdown.
Grace wanted something striking and unique, and opted for a black background to start. Then, as she said, she "messed around" until she got a "suitably spooky glowy text," which shows up quite vividly against the black: 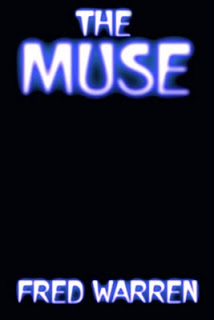 Here are Grace's exact words on the next step, as posted in a blog of her own, back when she was actually going through the process:
"Next I really wanted a picture of Stan, the main character. But who could it be? The answer turned out to be quite close to home, as I ended up photographing none other than my own brother when he came to town for a visit. My housemate at that time happens to own a wonderful fantasy sword, and things just came together after that. Over there you see one pic of many taken during that photo shoot. I was up on the veranda with the camera, and Andrew was down on the driveway so I could get that oblique angle. The black sheet was an aid to later pasting "Stan" onto my mostly black background." 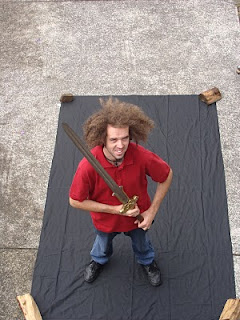 Next is a mock-up with "Stan" in place, in front of a pair of spooky eyes Grace liked initially: 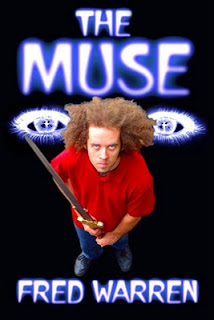 And then with a textured background: 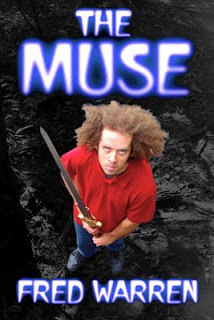 But, ultimately, Grace decided to mess around with the glowy eyes again, enlarging it and making it into a spiral. Here's how it turned out, on the final cover: 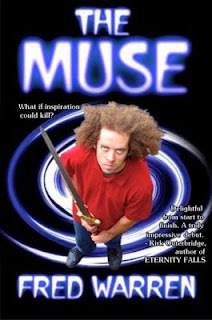 All of this, she said, was done in consultation with Fred. And to prove she's on the up and up about that, here's Fred's impression of the process, in his own words:
"In some ways, the cover was the hardest part of the book to finish. It
had to encapsulate the story and capture its mood in an interesting,
eye-catching manner without giving too much away. That's a lot of
weight for two little pieces of paper to carry. Grace and I probably
spent about two weeks on the font selection alone.

Writing the back-cover blurb was actually fun. Grace, Connie Brzowski,
and I spent over an hour in an online chat bouncing ideas back and
forth, one sentence at a time, until we came up with something we were
all happy with. The interesting part was that Grace and I had been
working at it for a while without much success, but when we brought
Connie into the discussion, the ideas began popping like firecrackers.
One more person's input made all the difference."
Remember me going on about the teamwork aspect? I'm not the only one who believes in that!
So, there you have it. I'll admit, I didn't give a lot of thought to the cover when I first bought the book (other than, "dude, that is some hair") because I knew what was important to me was the writing on the inside. But now that I have read the book, and learned about the cover design process, I see how this all ties together. The Muse is a fun book, with vivid characters and a bit of a wild ride in parts. The cover does capture that mood. Do yourself a favor--if you haven't read any of the books I've featured so far, start where I did.
Posted by Kat Heckenbach at 7:26 AM

For a recent signing event for The Muse at my church, Grace arranged a limited run of books with a different cover image, featuring Andrew in a more reflective pose. Pictures at http://frederation.wordpress.com/2011/01/17/book-signing-afterword/Pictures

It was sort of an experiment targeting an older audience, and people seemed to like it. Grace did a great job on both versions.

Hey, Fred! Thanks for stopping by, and for giving me some cool quotes to add to this. I love the cover of The Muse, and Grace does a rockin' job on this design stuff :).

I thought it was cool that she did that run with the different cover. I almost included that in the post, but things were getting long already ;). Thanks for adding the link!

"Dude, that is some hair" was my first thought, too.
I decided to read the book after attending a Christmas chat party with Fred in which he and I shared Jabberwocky quotes. I was impressed.
I'm probably going to start reading the book today at lunch. I'm taking the plunge, people! Wish me luck!