OK, I admit, I stole that title. It was the name of a panel I sat in while attending the 2009 Necronomicon last month. I was, of course, intensely curious to hear what the panel of four self-published authors had to say.

We all know there is a stigma about self-pubbing, and some authors/agents/editors are horribly against it (for obvious reasons). I've even seen a few authors that are horribly for it (read that last: defensive and control-freaky).

One of the authors who spoke at the Necro was Chris A. Jackson. He discussed intelligently both the wonderful freedoms provided by and the heavy responsibilities bound to self-pubbing. He also participated in a panel on small presses, so he has experience with both self- and traditional publishing, which made me take him even more seriously.

So, after the first night of the Necro, I went home and checked out Chris's website, www.jaxbooks.com. I read the first few pages of a couple of his books.

Now I was even more impressed.

I returned to the Necro and headed straight for Chris's table in the vendor hall. I bought his book Weapon of Flesh, as much for the wicked cover art as the impressive first chapter. 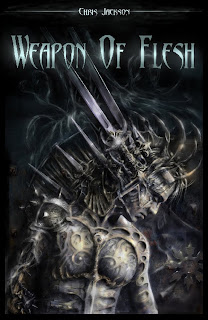 (Chris was super-nice and happened to be giving away t-shirts along with the purchase of a book, so now I get to wear that awesome artwork!)

Weapon of Flesh has a really interesting mesh of elements. It combines a martial arts feel with a touch of organized crime, all mixed with traditional fantasy. Sounds a little strange--you're thinking ninja-Godfather with Elves in tunics aren't you? Well, you'd be right. And believe me, it actually works!

The story begins with a boy, stolen from his mother and magically altered into a killing machine. (I found it amazing that the author made me connect with a character who was almost completely emotionless.) His training complete at the age of 16, the boy leaves with the man who has "made" him--a man he only knows as "Master"--to be handed over to the tyrant who has commissioned him.

But the boy is not delivered as promised, when his Master is killed and he suddenly finds himself alone, no idea where his destiny lies, but consumed with the need to find purpose.

This book shows that self-published authors are not always such because of lack of talent. As a matter of fact, I have stopped reading a lot of traditionally published books lately because they were boring and poorly written. The proof is in the pudding...not in the name of the publishing house.

You can buy Weapon of Flesh and Chris's other writing either through Amazon (look up Chris A. Jackson under sci-fi/fantasy) or at his website, www.jaxbooks.com.
Posted by Kat Heckenbach at 6:34 PM

Yeah, I've heard self-publishing is bad. I've read a couple and they were extremely bad. LOL.

I think it's just really subjective. So many different viewpoints in this industry, huh?

Go where God leads you and you can't go wrong.

"The proof is in the pudding...not in the name of the publishing house."

Great post and I have become a fan of jaxbooks by following your blog.

Yes that wicked cover art is enough to hook most anyone, but your review too, Kat. Sign me up :)

Love your musings and your blog :0)

I found you through KM's blog.

I have such mixed feelings about self-pubbed books because I've seen so many bad ones, but I know there are a lot of good ones out there, too.

Thanks for posting this. It's nice to see a fresh point of view on the topic.

And Chris' book sounds cool too.

I've read some really horrid self-pubbed books. And I've now read a couple of really good ones. I honestly think there are probably more bad than good out there, but I just feel for those brilliant writers who end up self-pubbing simply because it wasn't the "right time" for their book in the traditional market.

And I'll have to thank KM Wilsher for leading people over here--"Thanks, KM!!"