Well, I promised a post on this, and I guess I should deliver. The Necronomicon is a sci-fi/fantasy/horror/gaming/anime convention in St. Petersburg, FL. Guest speakers included authors, artists, professional gamers, and even a rocket scientist. I sat in on mostly writing panels, with topics like self-pubbing, working with small presses, and horror writing. There were games--like guessing the name of a movie based on a line of dialogue or a score of music. I did HORRIBLY at those, btw.

But the real fun was people-watching. Gobs of people wore costumes through the whole weekend, even though the costume contest was only Saturday night. Here are some of the better costumes featured in the contest (at least, they're the ones I liked the most): 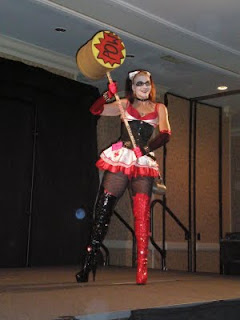 There were several Harley Quinns, but this one was the best IMHO. Those boots were killer--easily 7 to 8 inches. I couldn't walk in those to save my life (course I'm also 5'9" and would have been smacking my head every time I went through a door). They're nothing compared to what this guy wore.... 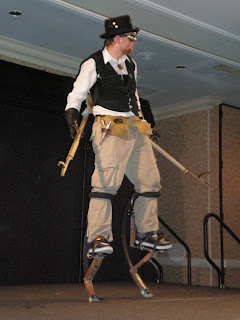 You should have seen him going up and down the stage steps. And treading across the marble tile. 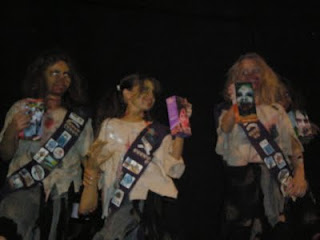 These girls were a major hit! Anyone for a zombie cookie? 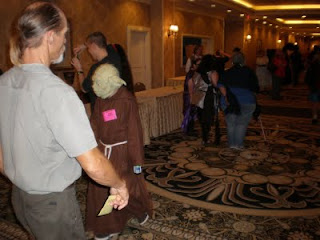 OK, so this one isn't part of the contest. But, come on. It's YODA. Can't pass up that photo opp. The guy to the left (with the pony tail) is a writer I met at the con. His name is Chris Jackson and I bought one of his books (and got a free t-shirt with it!). Check out his site at www.jaxbooks.com and look at the cover of Weapon of Flesh. The cover art is phenomenal. 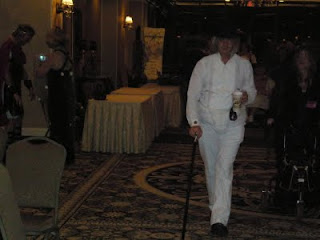 And finally, the ultimate in horror, the evil of evil, the monster of monsters.... 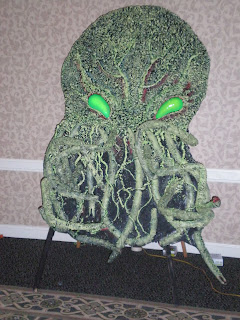 Yes, it's cardboard Cthulhu :). Actually, probably plywood. This cracked me up. I was watching as they were bolting on his, um, appendages, and laughed as I thought, Lovecraft most surely did not imagine Cthulhu with "some assembly required...."

OK, I know you're thinking, "Where are the pictures of Kat?" Well, I was the one behind the camera of course. But I did take a moment to pose with Cthulhu: 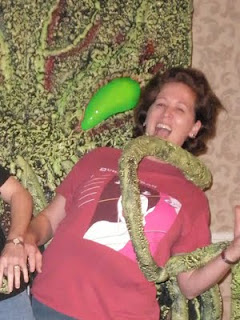 I really did try to scream, but it came out as a laugh despite my efforts. The only horrifying thing is how unflattering this picture is :P. And yes, that is a "Rio" shirt. Totally retro, eh? (Sure it has nothing at all to do with sf/f/h--I just love Duran Duran. The first night I wore my "DragonKeepers" shirt.)

So, there you have it. My first "Con." I had a blast and I'm already pondering costume ideas for next year...any suggestions?
Posted by Kat Heckenbach at 10:00 PM

Man, Kat this is “out of this world”. I can’t believe you had such and awesome opportunity right in your back yard. Thank you so much for sharing this with us. I wish wish wish I could attend J Maybe someday. Jaxbooks cover art is unreal! Thank you