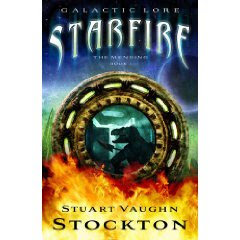 It's been a while since I've read an honest-to-goodness sci-fi novel. I tend more toward fantasy (way more), but something about this book intrigued me. It's part of the second run from Marcher Lord Press (a publisher I'd be submitting to in a heartbeat if they took YA), and endorsed by Donita K. Paul (all the reason I personally needed to buy it). But those factors aside--the book rocks.

This story has all the classic elements--an Empire at war, a young soldier who rose above his lowly origins, a prophecy...but with a twist.

The protagonist is no ordinary soldier. He's a Yanguch, a species of saurn.

Honestly, I have no idea how to write about this without thinking things like "talking purple dinosaurs for grown-ups"--but the book deserves to be taken seriously! It's well-written, action-packed, and intelligent. The characterization is strong. It's got some way cool technology and solid dialogue. Even the world-building descriptions don't weigh the story down, as can so often happen in sci-fi.

I enjoyed this book from beginning to end. And I felt the ending was balanced--the front cover says it's number one in a series, so I knew there would be a lead-in to the next book. I will definitely be buying the sequal when it's released.
Posted by Kat Heckenbach at 7:56 PM

Yes, Marcher Lord Press is awesome.
Have you read By Darkness Hid yet? From what I've read so far I think you would like it.

I've heard some great things about By Darkness Hid. I may just have to add that to my ever-growing book list...

Every time I start to make a dent in my to-read pile, I end up hearing about another great book. I suppose that is a very good thing!

Thanks for the recommendation!

I've been wondering about this book. I saw it on MLP website and wanted to read it.
What a great review, Kat!
My turn to pick it up :)