For the good of Goblinkind 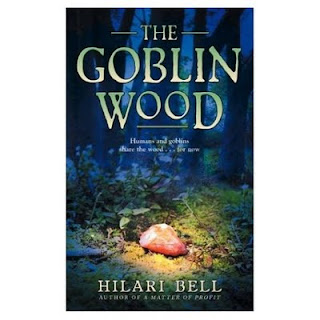 The Scholastic Book Warehouse Sale comes to our neck of the woods once or twice a year. I normally leave with a few easy readers for my kids and a couple of YA fantasy titles for myself. More often than not, the YA fantasy books are mediocre, but I'm only paying a dollar or two for each of them. It's a gamble.

Once in a while, though, I grab a book that makes me feel like I got a true bargain--a great book that I enjoy from cover to cover. That's happened on my last trip, when I picked up The Goblin Wood, by Hilari Bell.

The main character, Makenna, is a hedgewitch, as was her mother, whom the townspeople put to death for practicing magic. Makenna exacts her revenge, and then flees for the forest, where she forms an alliance with the misunderstood goblins.

Soon she has become leader of a goblin army that must defend themselves against the ruling Hierarchy that is leading the humans into goblin territory. The only way the Hierarchy can fight back is to send in a spy--a knight who needs to reclaim his honor. But will Sir Tobin follow through with his orders after meeting Mackenna and the goblins?

The world Hilary Bell has created is vivid and fascinating. Nothing on the cover indicated that the book was the first in a series, but the ending left a wide door open (still a satisfying ending, but one that obviously shows there's more to come). I was SO happy to know I could continue the adventure because I didn't want to leave!

The next book in the series is called The Prophecy, and I can't wait to get my hands on it!
Posted by Kat Heckenbach at 5:39 AM

A good review, Kat. And good book. I'll keep my out for this!

Kat, great review. I'll keep my eye out for this one :)