Worth Re-reading: Jinx by Sage Blackwood

Have you ever re-read a book or series and discovered that the second time around it just didn't do as much for you? That's happened to me several times. I've bought a series and kept it on my shelf, only to re-read it later and end up donating the books to the library's used bookstore.

That's NOT the case for me with this series. 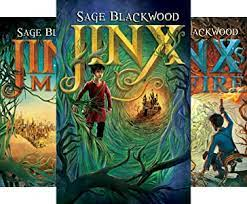 I originally got the first book, Jinx, way back when I was in the Amazon Vine program. I loved it so much, I bought the next two as they released. And recently, I dove back in, not sure if it would end for me the way it has with other series.

It only took a couple of chapters, though, for me to remember why I kept these books in the first place.

The story world is so cool -- the Urwald with its mystical trees and the Clearings where the people of the Urwald dwell. The "evil" magician Simon, smart but cursed Elfwyn, and of course Jinx, the unlikely hero who makes you want to take him under your wing as soon as you meet him.

This is a series I've recommended to many parents in the past when they're looking for books for middle schoolers and upper elementary kids. And now, well, I will be doing so even more emphatically!

Find the series on Amazon.

I don't normally go for YA stories, but Jinx looks pretty good. Thanks for the rec.