Well, it's finally happened. I've been called blasphemous. Okay, no, let me restate that: Someone on Facebook said that stories involving romance between humans and angels is blasphemy. The comment was part of a discussion that was at least partially in response to my novel, Relent, which features  Simone, who is half-angel. Despite the Bible going into very little detail about the nature of angels, many (most?) Christians believe that angels and humans cannot, um, join in that way.

Imagine the response if the conversation moved into other parts of the story. Like the fact that it was Simone's mother who was the angel, when angels are always referred to as male in the Bible. Oh, and Simone's closest relationship for years is with a demon named Wraith. No, they're not lovers, more like best-frenemies, but he is the person she turns to when everything hits the fan.

To be honest, I agree with the commenter, in the sense that I don't believe any of these situations are biblical. I'm not sure if angels ever take truly corporeal human form. And if they do, I've no idea if they can hook up. And if they could, I have no clue whether or not it'd actually make a baby. (At least, not hook up *and* get to stay angels.) I find it very doubtful that any of those things would or could happen for real. The Bible always speaks of angels in the masculine, but I'm not sure angels are gendered at all. And I absolutely don't believe angels and demons could be friends, or even frenemies. 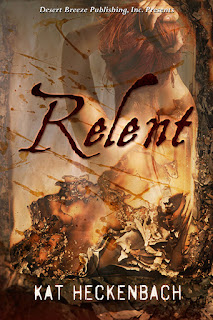 But Relent is a story. It's fiction. It's pure "what if?" My intent was never to be biblical about it. Relent is not a Christian spiritual warfare novel a la Frank Peretti. It's not an attempt in any way to create an accurate account of angels and demons in our very real world. It's hyperbole, an exaggeration. It's an illustration of someone having the worst happen--part of them falling as an angel falls, beyond redemption. It's allegory using actual Christian creatures as though they were mythical/fantasy creatures.

Many Christian readers are fine with the idea of vampires or werewolves or Elves finding redemption because they're pure myth. But angels and demons are real. I get it. I really do. But I've created my own lore in Relent. Yes, God is God, and heaven is heaven, and angels are angels, and demons are demons; but I take vast artistic liberties with all of it because I want to tell a specific story with a specific message and I need it to step out of reality to do what I want it to do.

No, I'm not going to spell out that message here. That would defeat the purpose of me writing the book. The whole point is to go about it through story, a speculative story. The whole point is to take everything out of reality as we know it and look at it in a different way. And to be honest, if you're someone who feels that all of those things have to stay rooted in reality in fiction, this novel was not written with you in mind as a reader.

And that's OKAY! It really is. I knew there would be Christians out there who'd have serious issues with Relent. Just as I'll likely have non-Christian readers who balk at certain elements as well. It's what happens when you refuse to write inside the box.

But is it blasphemy? Heresy? Feel free to think as you wish. I won't take it personally. I also won't push you to read Relent if any element of it makes you uncomfortable. That wasn't my goal in writing it. And honestly, I love that the whole idea has spurred a discussion, and I have enjoyed reading all the comments (which I unfortunately can't share here because it's a private group), and I look forward to even more viewpoints on the topic.

Yes, the Weeping Angels. Chilling episodes from Dr. Who.
i feel your pain, Kat. Get similar responses to Christian novels including dragons.

Aren't they supposed to be the bad guys? Satan is depicted as one after all. Didn't one of the saints kill the last one? How could you depict them as wise?

Gotta say, though, any feedback is better than NO feedback. Because that usually means nobody is reading your books.

Fortunately, I haven't gotten any negative comments about the dragons in my YA novels yet--and in those books dragons are actually pets :).

And yes, I agree on the feedback thing. I am glad it's spurred some discussion, even if that means I'm going to have some people refuse to read my book because of how I've handled angels.