The Trees of Toch Island 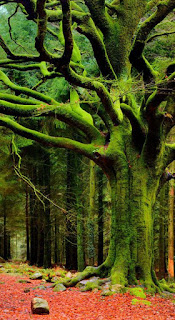 Trees play a big role in my Toch Island Chronicles books. In Finding Angel, Angel's friend and rescuer, Gregor, has the ability to make gateways using trees, magically connecting two different places and allowing him to travel great distances in seconds. I can't say for sure where the idea for that came from. I'm thinking that on some subconscious level it comes from my childhood.

When I was a kid, I lived out in the country. My yard had a lot of trees (great for pretending you're exploring an enchanted forest), and one in particular was my favorite. It slanted at about a 30-40 degree angle from the ground. I have no idea how it got that way--it looked as if it were partially knocked over and somehow re-rooted. The top of the tree had been cut off, and there was only a single large branch growing from its trunk, which because of the trunk angle grew straight up. (If you've read Finding Angel, you'll recognize that tree from Angel's back yard.)

That tree was where I spent many hours of my childhood. I loved walking up the trunk, turning around, and leaning against the upright branch. I listened to music like that, or read books, or simply sat and daydreamed. In a way, that tree transported me to other worlds, just as Gregor's Talent could transport him.

But it's not just Gregor's magic that makes the trees in Toch Island special. Many of the trees have magic of their own, and that magic comes from metal veining that runs through their wood. Why metal? That answer I don't have to speculate about. I made them that way intentionally. There is a very powerful tree on Toch Island called a platinum oak. Obviously, its veining is platinum. And its magic property is that of healing nearly any physical ailment. I created the platinum oak in my story world to represent the platinum-based chemotherapy that played a huge role in my conquering cancer. (That chemo is called cisplatin, and it's nasty stuff. But I'm here, and cancer-free for 13 years!) I gave other trees different magical properties, many of them related to the metals running through them. 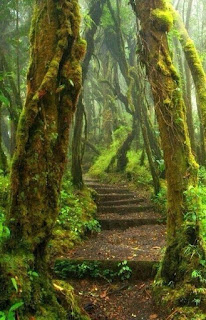 Another special role trees play on Toch Island is that of marking the graves, and the lives, of the Elven once they have passed away. I can't really give details about this without spoilers, but suffice it to say they represent life after death. The tree chosen for each grave is representative of the person buried there as well. Trees are quite special to the Elven, as is everything in nature, and the forest of Toch Island is full of ancient ones--you never know which grew there on their own, and which mark the graves of Elven ancestors.

Ultimately, though, trees are simply what make up forests, and forests have an energy, a feeling that is like no other for me. There is just something about being among all the trees, sheltered by the canopy, knowing life is all around you, hidden, sometimes unheard in the dense silence. Being in the forest calms me and reminds me what our world is supposed to be. Also, I always have the sensation that fairies really do make their homes there...

Images like those I've posted here make me want to wander off into the forest for an adventure. To see more like them, visit my Pinterest board "Follow Me Into the Forest."
Posted by Kat Heckenbach at 8:59 AM

these enchanting trees takes me to a different plane. this makes me wonder how the book is going to be. update us more with the details