From Costume-Hating to Cosplay Happiness

When I was a kid, I only ever dressed in costume for Halloween. And that consisted of going to the local Kmart and picking out one of those plastic suits that went over your clothes and tied at the back of your neck like a hospital gown. They came with a matching mask--a mask that had eye holes in the wrong place and tiny little "nostril" holes you could barely breathe through. So, you ended up breathing through your mouth a lot, which meant your breath condensed on the inside of the mask. BTW, that is just a random photo I found online. I have no idea who those kids are. I grabbed the image, though, because it looks so, so much like the photos of my brother and I when we were kids dressed up for Halloween.

Add to all the misery above the fact that I lived in Florida, where it's either steamy-hot or wet-cold in October, and you can understand why the only thing that excited me about Halloween was the candy. And why I didn't exactly jump on the cosplay bandwagon until very recently.

Sure, I went to a party with my husband once where we dressed as cave people, because cheap and easy. Many years later I found a witch's dress on clearance and snagged it, and I've worn that to a couple of Halloween events. But both are so far away from what we know as cosplay today.

Five years ago, though, was the first time I for realz cosplayed. I dressed as River Song for the award banquet at the first ever Realm Makers conference. (You can read about my experience making her gun holster here.) After that, I went with Professor Trelawney from the Harry Potter series. (A great excuse to use one of my handmade wands!) And my favorite was the year I dressed up as a gender-bent Seymour from Little Shop of Horrors, complete with handmade Audrey 2. 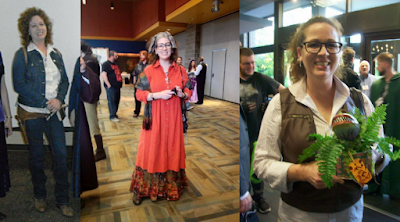 Audrey 2 now sits proudly on my dresser next to my answering machine. Wish I could teach him to answer the phone and scare off telemarketers.

Yep, I had to sneak in a little plug for the anthology, Victorian Venus, that contains one of my short stories.

Anyway, you might notice, although probably not, that the shirt I'm wearing for my Steampunk outfit is the same one I wore as Seymour. That's because I'm a firm believer in re-purposing. I'm also all about thrift shop bargains for costumes, which is where the shirt came from. As did the Steampunk boots, Seymour's vest, my dress for Trelawney, and the hideous purse I used to fashion the holster for River Song's gun. (Again, check out the link I gave you for details on that.) Most of the other clothing is from my closet or the clearance rack. It's really the hunt that makes this fun. And frustrating at times.

My favorite part, though, is the prop-making. In every costume, I have something completely made from scratch.

For River Song, it was the holster.
For Trelawney, it was my wand.
For Seymour, it was Audrey 2.
For the Medieval outfit, it was the cloak. (And technically a staff that wasn't in the photo.)
For the Steampunk outfit, it was the gun that I made from a dollar store ray gun: 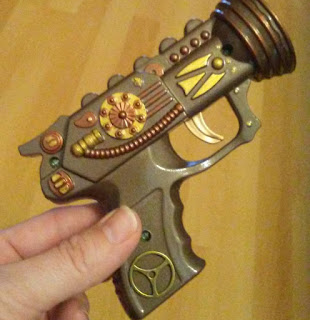 Unfortunately I didn't take a pic of the final-final product. Once I got into costume at Necronomicon, I stuck a tea light (the base of which I'd spray-painted to match the gun) on the end.

So, now, it's on to the next idea. What will that be? Oh, I'm not telling! But in a few months, when it's all finished, I promise there will be pictures.

Around Halloween, I see a lot of different costume ideas. People doing experimental fashion is what catches my attention. All your projects are worth appreciating. Though, sad that you didn’t capture the final look. Hope you will compensate soon.

I would have liked to have seen the River song getup. Nothing is fun if you don't catch the spirit of it.