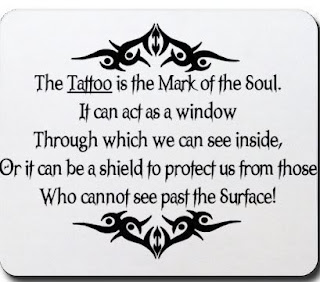 During a Facebook conversation with some other writers on the topic of character description, someone pointed out that I have a lot of tattooed characters. Once I thought about it, I realized, yes. Well, maybe not a lot, but definitely my favorite characters.

In Finding Angel, Kalek Halvard is an Elven rocker who powers his electric guitar with magic instead of a cord. He has tattoos on both arms, visible between the ends of his tunic sleeves and the leather bands he wears around his wrists. I don't describe the tattoos, but he's a musician, so there is definitely some music-themed ink. Gorgeous, rich colors as well. (I am also assuming he has tats under that tunic, but he's never shown me.)

In Seeking Unseen, Melinda gets a magical tattoo--one that can be removed or re-positioned any time, as many times as she wants. It's perfect for her, because like me, she doesn't want something permanent. I've thought about getting one, but the hold-back for me is that I feel if I do it, it's got to really mean something. As an artist, I appreciate art for art's sake, but there is just something so personal about tattoos. Tattoos tell a story--the story of who we are.

Like Taela's tattoos in Legacy Rewound. She's an unusual Elven girl, with skin much fairer than the rest of her race. And she has tattoos covering both arms and both legs, and much of the rest of her. They're not at all typical, though--they weren't added to her with ink and needles, but rather magic itself. Her tattoos simply appear on her skin as a record of her life experiences.

Wraith, the demon in my most recent release Relent, has tattoos covering him that tell his life story as well. If you can call what he has "life." He's a demon, after all--a fallen angel. And the tats on his human-form skin reflect that. Serpents and dragons entwine on his arms. The corners of bat-like wings poke up past the collar of his shirt--wings that match his real ones when he's in demon form.

Tattoos aren't just pictures. Even when they're the result of a drunken mistake, they tell a story. They hold memories and emotion. They record the lives of those who wear them, and serve as ways to keep something of loved ones.

The Dropkick Murphy's have a song that expresses that. "Rose Tattoo" is one of my favorites by them. Check out the video:


You can read the lyrics HERE.

Yes, tattoos are stories made of ink. And I love hearing the stories behind people's tattoos.

Do you have any stories behind your own tattoos? Or, if you're a writer, behind your character's? What inspired it? What significance does it hold?

Lol, no story because I never had any tattoo on my body. But this is something new that I have seen today that people have stories behind their tattoo.