Tips for Visiting The Wizarding World of Harry Potter 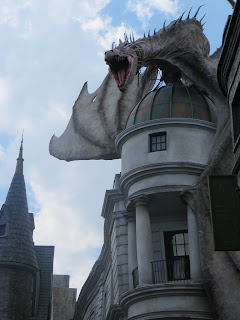 When you have been to the Wizarding World of Harry Potter as many times as I have, you come home with only about four new pictures on your camera. My last trip--which will literally be my last for a while because our passes are expiring and we're switching to Busch Gardens--ended a few days ago, and I realized I dragged my camera around needlessly. Oh well, fun was had.

So, instead of sharing images of my trip (although I'll include a few) I'm going to give you some tips:

1-- Ride the train both ways. If you have passes to both parks, you can ride the Hogwarts Express back and forth between Hogsmeade and Diagon Alley. The train rides have their own form of entertainment, including a view out the "window" and some cool stuff that happens inside the train as well. These are different each way. If you want the full experience, ride both ways.

Side note: the line for the train in Hogsmeade Station is pretty boring, but the line in Kings Cross Station is really cool.

2-- You can take food and drinks on the Hogwarts Express. You know how when you get in most lines, some costumed person tells you that you have to finish your drink before you get on? Well, not on the train. You can bring open drinks and food right on, even beer. Actually, in the line at Kings Cross there is a small store that sells snacks and drinks (including beer), although I've found it closed more often than open.

3-- In Diagon Alley, you don't have to wait in that horrendous line for Butterbeer ice cream. There is a place called The Fountain of Fair Fortune right next to the ice cream shop (Florean Fortescue's) that serves Butterbeer and regular beer, and if all you're getting is a Butterbeer ice cream in a cup (not cone, and not any other flavor), they have a secret little door they go through to get it for you. Shhhhhh......

4-- Speaking of secret doors, there are actually three entrances to Knockturn Alley at Diagon Alley. Let's see if you can find them.

5-- Actually, let's see if you can find Diagon Alley. For real, it's not marked, and once you know where it is and how to get in, sit outside the entrance and watch all the noobs with their maps and their confused expressions walking right past. It's true entertainment.

6-- Outside Diagon Alley sits the Knight Bus. Everyone lines up at the front of the bus to get pictures with the snarky talking head and Stan Shunpike. You need to go to the back of the bus. There are steps that lead up to where you can see into the bus really well, and you can't see inside from the front. The detail is amazing. I even smells like an old bus.

7-- Universal Studios got it ALL WRONG when they put Ollivanders in Hogsmeade. Any true Harry Potter fan will tell you that. They sort of fixed that by putting an Ollivanders in Diagon Alley, but most people don't realize that it's there, or that it's much bigger than the other one. The line is shorter because there are several wand rooms there. Also, there's more inside waiting room, and in Florida that means air conditioning! So, do yourself a favor and go to the real Ollivanders, and maybe people will think you've actually paid attention to the books and movies as well.

8-- You can buy interactive wands at either Ollivanders, and use them at various places in both Diagon Alley and Hogsmeade. You probably know that. What you may not know is that there are secret, unmarked places where the wands work. They are not marked on the map you get with the wand, nor is the ground marked where you stand. You have to find those places, and the local wizards and witches are generally more than happy to help you. 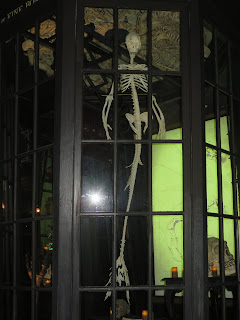 10-- Some of the coolest Harry Potter merchandise isn't actually sold in the Harry Potter areas. If you can't make it into the shops in Hogsmeade or Diagon Alley--and that's quite possible, as they are far too small (poor planning, dear Universal, poor planning)--you can still find just about everything, and some stuff you can't get in the HP sections, in the big stores up in the fronts of both parks.

11-- Honeydukes sells candy by the pound, and it can often be a bit less expensive than the prepackaged versions. This includes Bertie Bott's Every Flavor Beans. That one in particular is a big savings. So if you've already splurged on the packaged one, and gotten the flavor guide, hold onto that paper and just buy the beans next time. (That said, I have bought so many glass jars of candy there because I love the jars. I use the empties for all kinds of things, like toothbrush holders.)

12-- Saving money on merchandise is easy if you have an annual pass. The Preferred Pass and Premier Pass get you 10% off all food and merchandise. ALL food, and ALL merchandise. The only thing it doesn't apply to is alcoholic beverages. Also, it includes parking, which is normally $17. If you're a Florida resident, though, I recommend having one family member get that pass, so you get all the discounts, then have everyone else get the Power Pass, which does have black-out dates, but who the heck wants to go during the hottest and most crowded times anyway?

13-- For you foodies: The Leaky Cauldron in Diagon Alley has a significantly bigger menu than The Three Broomsticks in Hogsmeade. (Although we like the atmosphere at Three Broomsticks better.) Leaky Couldron also has a full breakfast, which is really good. Fun tip: let your kid order the breakfast with black pudding and don't tell him what it really is....bwahahahahaha....

14-- For you crafties: Beer, that is. Hogsmeade has their own brew, the Hogshead Ale. Diagon Alley has their one as well, Dragon Scale red ale, each of which can NOT be found at the other park. Don't even try. I promise, they are exclusive.

15-- Some miscellaneous ride and hotel stuff:


And....I think that should do it. It's plenty for you to remember if/when you make it to the Wizarding World of Harry Potter.

Oh, wait! One more thing. See the puppet shows on the open stage in Diagon Alley! They are amazing!! 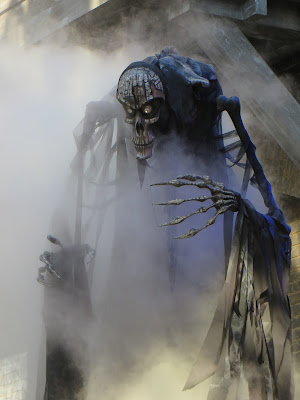 Posted by Kat Heckenbach at 7:34 AM