It's Saturday night. I've been home from St. Louis for two whole days. My trip to the Realm Makers conference was more than just that--the whole fam tagged along and we spent extra days exploring the town. Two days driving up, two days at the con, three days in STL, and two days driving back. That's NINE days, for you math-challenged people.

And now two days of recovery :).

I did not, and do not, intend to give ya'll a minute-by-minute of the trip, but I have realized that even to hit the highlights I'm going to have to spread this over a few posts.

Let's start with the drive up: Hours getting through Florida and Georgia, much of that trying to get through Atlanta. Sorry Georgians, but the traffic in Atlanta alone is enough to make me never want to live in your state :P.

After FINALLY making it through the state I shall never live in, we stopped for the night in Chattanooga, TN, and stayed at the....wait for it....Chattanooga Choo Choo hotel. It was so cool:


We stayed in a regular room, but you can actually stay in train cars that have been converted to suites. Some of the cars are restaurants, too.

We arrived in St. Louis Thursday night and hit a cool little historic district called St.Charles and had dinner.

The next day was the actual Realm Makers conference.

Had to be there bright and early for check-in. The first person I laid eyes on was Robynn Tolbert. She is as cool, and obsessed with food, in person as she is online.

There is no way I can list out everyone I met. Plus, being that I'm late in the game as far as posting, there are summaries of everything all over online. Suffice it to say there was much learning and much hugging and many tired bodies dragging themselves back to their rooms both nights. I had a great time listening to the speakers, and participating on the panels--my topics were "science and magic" and "Christian horror."

I also got to give advice to some aspiring writers. The days were long, but I was so, so sad when it was over!

BTW--I have a WHOLE ALBUM of pictures on FB. Go, check 'em out, then come back for the rest of the trip.

I will however, at least show you one more...my River Song costume, since I made such a big deal about it here before.

And I have to say that I was BLOWN AWAY by the amazing organizing skills of Becky Minor, whose brainchild this whole thing was.

So, End of Day Two in St. Louis. Realm Makers is over, and it's time for the fam to do stuff on our own.

Of course we went to Meramec Caverns, which is about an hour out of town. Beautiful! 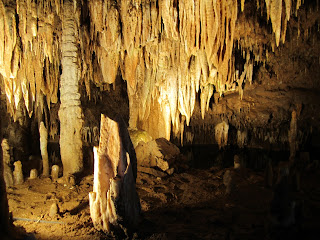 I wore the Realm Makers t-shirt that I won:

The day ended with dinner at a barbecue place not really worth mentioning. I know--how anti-climactic of me!

But that brings us halfway through the trip, so I'll stop here and finish it up next time...

Posted by Kat Heckenbach at 7:48 PM

Thanks for the shout-out, Kat. And I'm glad your whole trip (Atlanta aside) was a time of good memories. Here's to future years of awesomeness!

You're welcome. You deserve much more than a shout-out, though! :)

And I am SO looking forward to what Realm Makers brings in the future!

I'm blurry because there's food just out of frame and I'm making a lunge for it.

The horror panel was probably my favorite panel event and you're one-third the reason. ;)

Looks like you had great time at the conference and getting there. Bummed I couldn't make it this year, but life gets in the way. Maybe next year.