Are Consequences Unrealistic in Fiction? 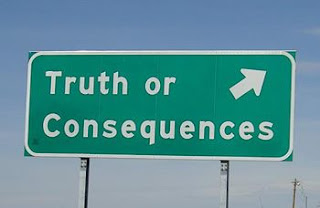 I recently finished a book that started off with the main character getting stoned. I thought, at first, maybe the book would end up showing this as a poor choice. Well, she did slide into mental illness, but that was from her inability to deal with her sister's murder. There was really nothing in the book that sent the message that this girl's choices had negative consequences.

For example, she gets a suspicious phone call and goes off to a bad section of town to meet a guy who claims to have some of her sister's stuff. He's a drunk and a junkie, but she still follows him into his apartment. Ah, but he's a nice guy. And she blows a bike tire--late at night--and big tattooed guy offers to fix it for her. She follows him to his back yard, where his big spooky van is parked. He turns out to be a complete teddy bear who really does fix her bike. Oh, and within a couple weeks they are sleeping together. Overall, she's out doing all this stuff, never gets busted, never gets hurt, and even meets the guy of her dreams....

OK, so kids do get lucky. I know I got very lucky during my wild-child days. But if I were talking to teens, I wouldn't tell them just those parts. I wouldn't write out just the cool stuff because, even though I think teens are awesome...I think teens are awesome. In other words, I'm not looking to just connect with teens, I'd want them to learn from my stupidity, so they don't go out and screw up their lives because I care about their lives, which means going past the party days into what the consequences are.

In fiction, that can be hard to do--I get it. But since we authors do have the ability to manipulate the story, don't you think we ought to compact some of it down to show these things, no matter how "real" we want to make our fiction?

Oh, yeah. I used that word: "real." Yep, writers talk a lot about making their stories real. But the truth is, we make them real-ish. Events in books are generally things that would never happen. People are so much more eloquent--even the master of natural sounding dialog doesn't write exactly what people say in real life, or we'd have lots of books filled with rabbit trails and "um..." and repetitiveness. And remember, a book is usually only a slice of someone's life, but readers want resolution. That is what makes a story as story: a beginning, a middle, AND an end.

So tweaking details is necessary, such as having consequences come a little sooner than they might in real life (we know cancer doesn't happen after the first cigarette, but if all you do is show the first smoke, you'll never understand the danger).

On the other hand, you don't want your writing to be "preachy." How gag-worthy is it when the good characters are so perfect and the bad ones are so bad? Only the bad guys ever cuss and drink. Only the sleazy girls are hooking up with guys. Miss Prim-and-Proper studies all day and wins Mr. Popular from her sheer goodness  and has a perfect life while the sinners are off dealing with teen pregnancy and broken hearts, or sitting in jail because they shoplifted a DVD.

No, life isn't like that. Good people make mistakes. Sometimes they get caught, sometimes not. Sometimes they learn from it, sometimes not. Bad guys have a history, usually of something painful that makes them that way. And just like good people, bad guys sometimes get away with things and sometimes don't. When you take it to the point of absolute black and white, with characters that have no shades of gray, it starts feeling more like a lesson than a story partly because it just so totally doesn't ring true to real life.

But how do we find balance? How far is too far when it comes to showing reality? Do we owe it to our readers to include consequences?

It doesn't sound like that particular author believed in consequences! Sounds like she was writing her own teen dream la la land.

Actions have consequences, and fiction resonates more if the consequences are realistic. It's one reason I love Brad Bird's work (The Iron Giant, The Incredibles), because every action has a logical consequence, even when it's something as nutty as Elastigirl getting stuck in automatic doors. It still follows a logical progression.


I'm writing a story right now where the entire story hangs on the MC's choices and the consequences. I'm thinking very hard to make sure her choices and their consequences make logical sense--not following the Oracle's instructions leads to getting her eye slashed by an assassin. But did it, really? The doubt in her mind is what makes it fun.

You know, I really like ambiguous endings for stories, and in turn stories that make you ponder the consequences. But I also believe a story needs resolution at the end--and this book didn't have it. It might have been going for ambiguous or thinky, but it just felt like the story unraveled and the girl in the end decided to just be happy with her life even though everything had pretty much gone to hell.

And the next Toch Island book is going to be very much about a character and the consequences of her choices, too...

I believe that characters have to learn from their mistakes. They have to grow in some way. That's the point of a story, the character arc. I am tired of teen stories that allow drunkenness, promiscuity, drug use, etc. to carry on without any consequences. No they don't have to OD or get pregnant but there has to be something even if it's nothing more than internal guilt.
On the other hand, I think a story with a good hero/heroine who consistently makes good choices and has a happily ever after tied with a pink satin ribbon is just as disgusting. There's no reality to that and the audience is narrow.
I don't want to read a slice of life story about a rebellious teen making poor choices and never finding redemption. Neither do I want to read about Miss all-honors-voice-of-an-angel volunteering at a homeless shelter where Mr. Clean Teen Heartthrob is volunteering incognito where he gets his "ordinary girl." I don't think I was ever so naïve to think that's the way the world works.

Hmm, maybe authors are so busy catering to what they think teens want to hear, and so afraid of scaring them off if they get even a hint of preaching, that they drop the ball when it comes to consequences and responsibility?

Or the authors are so young and raised in this age of "do what you want when you want with who you want" that they honestly don't consider such things themselves.

Which is just sad. I'm all for people learning from their mistakes but it's generally more pleasant when mistakes can be avoided. And even if a character doesn't get cancer from one cigarette, they may rethink the activity when their uncle gets it, etc.

I guess part of it boils down to why people even read. If it's just to entertain and has no other purpose, then no one is going to notice unrealistic lack of consequences. But if there's even a smidge of wanting to grow as a person through the reading experience, then books need to make us think, feel & maybe even learn a thing or two...

Happygret, I think you hit the nail right there with the fiction that takes it too far the other way--no one is so naive to think the world works so perfectly.

LadySaotome, I think you're onto something with, "maybe authors are so busy catering to what they think teens want to hear, and so afraid of scaring them off."

I think it's a matter of believability more than preaching. Consequences should come when it's believable for the character to experience them. Many teens smoke pot, but if you make the character a heavy pot smoker and then talk about how smart and athletic they are, it gets hard to believe. Especially if the plot points are around them being smart and athletic.

I guess I'm saying that some things shouldn't be included if the lack of or inclusion of the consequences harms the main story. It's better to remove or soften the behaviors. If it's unrealistic she wanders the bad side of town, chances are you can change it with no problem because it's an overall distraction from the story. You can break down and be rescued by a kind Samaritan who doesn't look the part on a highway as easily as a ghetto.

Great point, DM. I think believability is key. Consequences can't be dismissed, nor can they be contrived. If they're dismissed altogether, your story loses credibility (and purpose to a degree), but if they're contrived that's when the preachy feel comes in.