A couple of nights ago, my family, which did in fact include me, went to the Monster Jam. That, for those of ya'll who don't know, is a monster truck rally where monster trucks race and jump ramps and drive over things like old cars and crush them. (At this one they crushed a couple of RV's. With our travel trailer still torn apart as my husband battles leak damage, I can't tell you how cathartic it was to watch that!)

Monster Jam is a quintessential redneck pastime, which means there was a lot of camouflage clothing and denim, and lots of baseball caps and cowboy boots. It also meant a lot of really nice people and much hooting and hollering :).

I can't say I was jumping for joy over the idea of going to this. Other than the stunt show at Disney's Hollywood Studios (which is just awesome cool), I've been to exactly one car-related event. Stock car races. Six. Hours. of old cars circling a dirt track. I swore I'd never do anything like that again. My husband knows the mere mention of the event is enough to put daggers into my stare.

Fortunately, Monster Jam is different. There's this whole freestyle portion, which is where the crushing and such comes in. It starts off, though, with just racing. The racing part wasn't too exciting for me, but the trucks are pretty dang cool. I would pick the design/name I liked from each pair and root for them. There were trucks like:

El Toro Loco, which actually blew smoke out its nose: 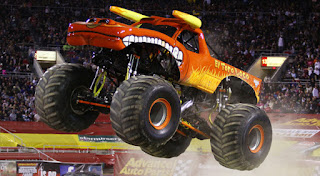 Grave Digger, which seemed to be the crowd's favorite: 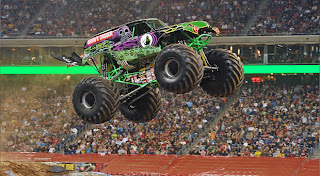 But my geek side took over and I found myself rooting for trucks like The Crusader. What fantasy fan can resist a knight and sword? 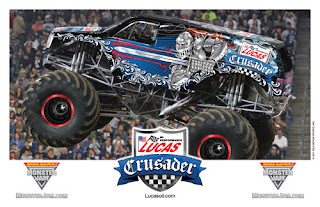 My favorite of the night, though, was Wolverine! 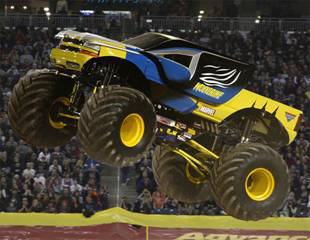 Which got me thinking about all the possibilities for Monster Truck designs.

I found on the official Monster Jam website that there are a lot of superhero trucks, like Hulk, Superman, and (swoon) Thor! Even a Zombie and a Dragon's Breath.

But what I'd really love to see are some majorly tricked-out geek-themed trucks. Like the Star Ship Enterprise. And the TARDIS. How about a Dalek Monster Truck?

Couldn't resist--I googled those ideas and came up with nothing, but I did find: 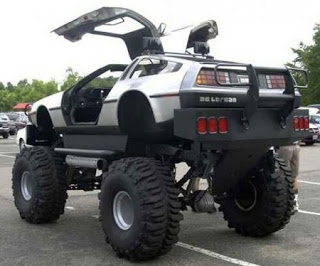 Or maybe some fantasy creatures like gargoyles or werewolves.

Of course, the ultimate would be Cthulhu. That's a Monster Jam I'd be really excited about!

So, how about you? If you were designing a geek-themed monster truck, what would it be?

Posted by Kat Heckenbach at 6:02 AM

The chupacabra, of course. You are too funny!

We named our blue-pearl RAV4 after Glitch-Bob from Reboot and got a GL1TCH license plate to go with it. I think a monster truck designed like Megabyte or Hexadecimal (two of the villains) would be pretty neat.