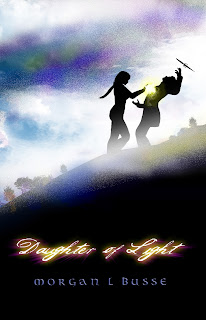 Daughter of Light is the story of Rowen, a girl who was left on the doorstep of her adoptive home when she was a baby. When she reaches adulthood, right after her adoptive father's death, a strange thing happens. A white mark appears on her palm. With it comes power that frightens Rowen and ends in her banishment. She has nowhere to go, and takes her only option: a position as personal guard to a princess in the White City, where she is forced to use her powers and risk discovery when war is waged on her new home.

I will start with the positives:

Morgan has strong building blocks. Good plotting, pacing, world-building, and characterization are all there. The story is told from four points of view: Rowen, Captain Lore (Rowen's commanding officer), Nierne the scribe, and Caleb the assassin. They are interspersed at good intervals and lead the story's pacing well. Description is aplenty, giving a solid picture of every place and person. I felt a connection to the main characters, particularly Caleb. It's traditional fantasy, so there is a certain formality to the dialog, but it's not overdone and works quite well.

I felt the world-building was the best of the book's elements. The landscape and cities, political relationships, races of people...all very rich and complex. I noticed several hat-tips to Lord of the Rings. And I particularly loved the quirks of the Alarian race, such as the eye color that reflects the changes in the sea. Very cool :).

I love that this story is not focused on the budding romance between Rowen and Lore. It is there, and relevant to the well thought-out plot (yay!), but it doesn't overtake the real story!

I also loved that there is plenty of dark material in the book, all handled quite well. One particular scene stood out to me in which Rowen sees into the mind of a rapist--she gives the *perfect* amount of information, showing the atrocity without giving gory details. It wasn't sanitized at all, but it wasn't gratuitous either.

The faith elements are well-woven into the story, and again are relevant (yay!) rather than contrived. Overt, but not preachy. Well-balanced.

But now, the negatives...

Morgan obviously has skill, but it is spattered with an accumulation of  "weasel" words and "filter" words that I found distracting and distanced me from the pov--something that should have been caught during the line-edit. (On that note, as I've found in all the MLP books I've read, there were quite a few typos.)

I also personally would have liked to see longer sentences, which would have given the prose more fluidity and eliminated some redundancy. Redundancy showed up in another form, but I hope Morgan sees the compliment in this statement: she states the obvious, "telling" the reader things when she has just done a perfectly good job of "showing" that very thing. Trust your skills, Morgan! If you show us, you don't need to tell us :).

In all honesty, readers who are not writers will likely not notice most, or possibly any, of the things I just pointed out as negatives. But they made my editor hand itch the whole way through.

Despite my nitpicking, I foresee reading the next book in the series. And I have no doubt Morgan will quickly build a fan base with this fantasy tale that is likely to capture readers who might otherwise not read the genre.
Posted by Kat Heckenbach at 6:29 AM

Thank you for the review, Kat. Writing about someone who can see the deepest, scariest parts of a person without going too graphic was a challenge. I'm glad you thought I pulled it off :)

You're welcome, Morgan! And yes, it is hard, but you did a great job with that!!

Daughter of Light was one of my favorite "discoveries" of 2012.

I recently abandoned reading two very famous fantasy series (which will remain nameless) because they were tedious. Morgan's book kept the pages turning. A good book should pull in and propel the reader forward. If I feel like I am slogging through a swamp, I move on to another book.