More Thoughts on Book Reviews: Turning the Scope Around 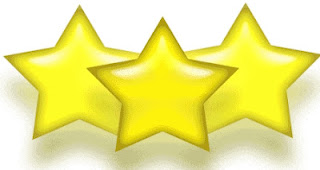 I had an interesting online conversation the other night with a writer friend of mine. Not someone I know deeply well, but have chatted with a several times and he's someone I respect as a writer. He'd just read Finding Angel, and has rated it "3 stars." He sent me an email to give me a heads-up before posting the full review, since it's not going to be a glowing, raving one. I appreciated it, and asked for some personal feedback.

While I didn't take the rating personally in the first place, our conversation made me feel even more okay about it. He made comments like "steady, solid prose." The main downside was that the action didn't start soon enough for him.

I found myself saying, "I'd rather hear that I can sling a sentence but the story was too slow for someone's taste than hear that my prose is clunky."

It was a gut reaction. Before that moment, I had no idea I felt that way.

And then he went on to give an example of a book he also gave 3 stars to for similar reasons as mine. Mrs. Perigrine's Home for Peculiar Children. I nearly laughed out loud. I LOVED that book.

THIS is where explanations make all the difference in the world. I could have seen his three star rating and been hurt. But because he backed it up with reasoning--honest reasoning--I am totally fine with it. It put me in a class with a book I'm honored to be compared to--regardless of star rating. I can see because of his comments and the comparison to Mrs. Perigrine's that this is something I'd consider a taste issue.

You see, I happen to like books that take their time to build a character and a world before starting the heavy action. I also like subtlety. Little hints and clues of things to come that don't necessarily smack the reader in the face.

I read a blog post very recently about Madeline L'Engle. It had to do with her religious beliefs, but the blogger commented that he was in the middle of reading A Wrinkle in Time. He said that thus far he is finding the book "boring."

Boring? That was *the* book that spawned my love for fantasy and sci-fi novels. I picked it up today and read the first few pages and my heart did flip-flops. I love, love, love A Wrinkle in Time. One thing I love about it is that it doesn't just slam you into action. It starts with Meg sitting in the attic while it's storming outside. She's just thinking about her life, letting us get to know her.

BTW--I have thrice had my writing compared to Madeline L'Engle's and nearly had my head soar right off my body! Logically, if we follow this through, that means the blogger I mentioned would likely find *my* book boring. But knowing he feels the same about a book I adore makes that perfectly okay.

Anyway, my writer friend has yet to publish his review, but I do have one three-star on Amazon so far. I'm going to share it with you, and give you my take on it.

I really enjoyed this book. The story was creative and imaginative. I loved the characters throughout, especially Angel, Gregor and Sir Benjamin. The writing was a bit disjointed at times. I would have liked a bit more of a fluid feel through the text, but I was pleasantly surprised with the complexity. It was far more then I expected.
I certainly was wrapped up in the storyline, curious to turn the next page and see what awaited me. I could have done without the small interludes between the scientist and Dawric. I didn't think they added much in the ways of story or suspense level.
I think this is a great Middle Grade Fiction read. It is simplistic enough that a child could follow it and not inappropriate in content. Teens and Young Adults may be interested as well, but might find it to be too choppy for their taste. A fun story and worthy read.

There are two main complaints in there:

The reader found the writing disjointed/choppy/not fluid enough--which to me are all essentially the same thing, and refer to the style of writing. They didn't say my dialog was stiff and unnatural or my sentences were clunky. They're not saying my writing is bad, just not the style they prefer.

The reader also didn't dig the villain interludes. I knew from the beginning those would be a point of either love or hate for many readers, falling into the category along with prologues--extraneous info that some readers feel passionately against (a reason I kept those bits very, very short). I can also take it to mean the the story stood strongly on its own without the interludes, which is a good thing.

Anyway, in this review, the positives seem to far outweigh the negatives. I see words like: enjoyed, creative, imaginative, loved, pleasantly surprised, complexity, more than I expected, wrapped up in the storyline, curious to turn the next page, fun story, worthy read.

If that's a three-star review, I say bring 'em on!

Well, of course I'd rather have higher ratings. But I'm looking at it this way. The three-star reviews I've had so far have had such positives in them I find it hard to be upset. So far, I know of four people who have said they'd rate Finding Angel 3-stars:

The two I've shown above.

Another is a reviewer who ended up asking me so many questions about Finding Angel we became friends. That, to me is a positive. Not just that I got a new friend out of the situation, but despite the story not wowing her, she continued contemplating it.

And the fourth person is a good friend, who has not posted a review but discussed her rating with me personally. I'm going to respect her privacy and not give any details, but I will say this--I respect what she had to say to me, I didn't take any of it personally because I know she has very particular taste, and I know that on some level the story *did* hit home with her and I am happy in that knowledge.

Also, if I extrapolate (which is a highly inaccurate process, but all I've got here), taking into account all the reviews I know of posted online and the comments made to me by readers that were never posted as reviews (sorry, you'll have to take my word on this), for every three-star review I get I'll be getting several four- and five-star reviews. As long as the weight leans toward the top of the scale I can be happy, because you really can't write a book that pleases everyone. (Even Harry Potter and the Sorcerer's Stone has 198 three-star reviews on Amazon right now. But the others outweigh them by so much.)

My point in all this is to follow up an what I was talking about in my last post about star ratings. Different elements mean different things to different readers. When I first look and see two stars knocked off a rating of my book, I think, "Holy cow! What did I do?" But for them a star isn't necessarily made of the same stuff as it is for me. Not that it answers the question to life, the universe and everything, but I find that interesting.

Thanks for indulging my inner musings as I turn the microscope on the ratings given my own book.

Posted by Kat Heckenbach at 7:26 AM

I tend to look more at the contents of the review rather than the star rating. The stars as so ambiguous and so many people use a different system of rating that I feel they're almost worthless. If someone gave something of mine a one or two star, but mentioned in the review that they disliked the style or something, I see it as constructive and personal preference that helps negate the sting of a low review.
Of course, that could be coming from the fact that I really don't have many reviews on anything right now. But I'd like to think that that would be my attitude. ;)

The interludes were an interesting device and worked quite well, imo. I think the structure of the story benefited by the added insight of the villain. I say, heh, writers need to experiment with all kinds of story telling strategies.

Heather, I tend to do the same when it comes to other people's books. When I'm researching a book I'm interested in I've even read one-star reviews that convinced me TO read the book, because the reviewer dislikes something I like.

But with my own, it's hard to not look at that number and think, "I must get all fours and fives." But seeing the content of all the reviews I've gotten helps me see realistically where my strengths and weaknesses are. Of course, I'm bracing for that first one-star...

Lyn, thank you! The villain interludes were a response to one beta reader's comment that the villain presence wasn't felt strongly enough. But given the plot and the nature of the mystery I had to find a creative way to give him stage time. Glad it worked for you :).

My first book has been consistently described as "a slow starter," but I did it on purpose and I stand by it. If not having a head explode in the first 100 words causes some readers to move on, I'm OK with that because not everyone is going to like my writing style, nor should they. I prefer to meet the main character before the danger starts and that's how I write. So far, anyway. ;)

Well, Robynn, you know I love your writing, so we are definitely in agreement on this :).