Where I've Been, and an Award or Three 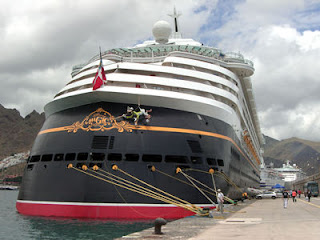 This is gonna be short and sweet. I've been out of town for the last six days. My in-laws' 50th anniversary was in February and to celebrate we booked a family cruise--which we just got back from today! Yep, five nights on the Disney Magic.

The ship is awesome, and the crew is more awesome. The shows are excellent. The food varies from good to outstanding. We had three stops: Key West, Nassau, and Castaway Cay (Disney's private island). Key West in a word was "meh." Nassau was cool, but there is either rich/exclusive/touristy or dumpy with very little in-between. But the pirate museum was uber-cool and the conch chowder was the best I ever had. Castaway Cay was beautiful, but simply reinforced the fact that I am *not* a beach person.

Oh, and I had a cold the whole time. I still have no voice. It didn't deter me from having a great time, though!

Did I mention I got to see The Avengers and John Carter while on the boat? Epic.


I got two bits of news while I was gone, too:

Finding Angel did not win the YA category of the Grace Awards (although it made finalist a while back).

Finding Angel DID final in the INDIE awards, which I believe means a silver medal.

And as I've already said, Finding Angel made finalist in the Compton Crook Award, too. Finalist in three contests...not terrible, I think ;).

There might be more to tell ya, but I'm tired.

Congrats on the awards, Kat. Sounds like you had a good vacation, except for the cold.

Thanks, Jeff! Yes, it was pretty awesome. The cold was just annoying :P.

Sorry you were sick. Sounds like an EPIC vacation. Good for you!

Thanks, Caprice. It was pretty epic :). Definitely would love to do it again--only not sick :P.