I have been all over the place, both physically and mentally, the last few days. If you follow me on Facebook at all, you possibly noticed that I barely posted there. For some reason, I ended up with nonstop plans all weekend.

While I was running around, though, I noticed so many things I've given thought to blogging about: 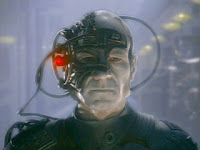 1) At a party the other night, we played "Catch Phrase"--girls against guys. The guys guessed the correct answer of "chrome" with my husband's nebulous hint of "the opposite of black." I could only come to the conclusion that Men are Borg, because how else would they all go *there* with that hint????

2) At my writers meeting the next morning, I took the prologue and first chapter of a manuscript I've had in the works for a while. No, it is not at all related to the Finding Angel series. (Actually, it's not even fantasy or YA.) One of the women there--a very talented writer, whose work I've read so far has impressed me immensely--said after reading my excerpt that it made her feel like "deleting everything (she's) ever written." This hit like a train for me, as that is exactly what I have said in the past about books that have blown me away, and hearing it about *my* writing nearly knocked me over. My Writing Did What? 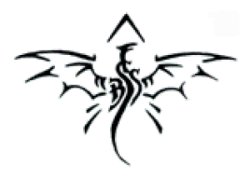 3) I came home from the meeting and found that an email telling me that Finding Angel is a Finalist in the Compton Crook Award. Now, I was rather honored when they contacted me the first time, saying they had bought a copy for consideration in the contest. Yes, the Compton Crook is an award that is not just given to those who enter themselves or are nominated by others, and there is no entry fee (so I'd assume there are a lot of entrants), and the prize for winning is pretty dang spiffy, and I was so taken aback initially I wrote to the contest coordinator to make sure someone hadn't used her name to prank me! But yes, they *found* Finding Angel on their own. And now she's a finalist. I wish I knew how many finalists there are, and out of how many entrants. My research hasn't proven terribly helpful, although the few places I've found that list finalists from past years show only a handful. This leads me to believe I need to feel crazy honored to have made it this far!!!

4) I went to a party for a friend who has adopted a little boy. She already has two adopted sons, and they have a beautiful family :). I met another adoptive family there--one with nine kids! The parents are white, but the kids are of all different races. I was so incredibly impressed with them. Having nine kids alone is something that would present challenges. Having nine kids who are of different races and from all sorts of backgrounds that may or may not have involved abuse and who-knows-what takes something special. And these people have it! Those kids are SO loving--to each other, to everyone--and well-behaved. And I found out the mom could never have kids of her own due to a rare cancer she'd had as a child. I firmly believe that God does NOT bring bad things onto people--like giving little kids cancer--but He DOES turn bad things to good all the time. And He used her unique situation to lead her to adoption, where she obviously belongs. All I can say is "Wow."


5) My devotional this morning centered around the beginning of Psalm 19, which reads:

1 The heavens declare the glory of God;
the skies proclaim the work of his hands.
2 Day after day they pour forth speech;
night after night they reveal knowledge.
3 They have no speech, they use no words;
no sound is heard from them.
4 Yet their voice[b] goes out into all the earth,
their words to the ends of the world.

This is a really special verse for me because it is where the inspiration for one of my Finding Angel characters came from. Kalek is Elven, but you won't always notice his pointed ears through the mass of long, curly hair. Not too many Elven have tattoos like he does either, or wear leather, or play an electric guitar (without electricity). But even more unique, his music gives voice to the stars' declarations referenced in this verse. He is My Favorite Character in Finding Angel, even though he doesn't get a tremendous amount of screen time. He gets a bit more in the upcoming Seeking Unseen, and will have even more spotlight time in the third book (which at this point is only at the very beginning stages of being plotted out).

All right, that last isn't really part of the "weekend" but it still struck me so I included it. And obviously I'm not going to blog about these things individually now. That's okay. My days should be slowing down over the next couple of weeks, so I should be able to come up with more topics. Even though I'll be deep in the editing mire...

Posted by Kat Heckenbach at 6:33 AM

Ditto the men are Borg! It's no fun playing games like that with guys.

You should have seen the looks exchanged by the women when the men were answering some of the questions. :)

So when are the winners announced for Compton Crook? Best of luck!

Thanks, Caprice!! The email I got said the winner will be sent an email on the 17th (tomorrow). So, I suppose if I get none, then I know I haven't won. Not exactly holding my breath. Wishing--hard. But not necessarily expecting.

I just would LOVE to know the numbers. How many books were entered, and of that how many made finalist? Was I in the top 50%? 10%? 2%? Yes, it does make a difference to me, but no matter what I am honored.

What a fun and exciting weekend! I miss playing board games...haven't had anyone to play with since moving out here. That's awesome news about your book. Congrats!

Ralene, Catch Phrase is awesome. It's this little hand-held thing--no board, no pieces. It just gives you words/phrases and you have to give clues for others to guess them. A friend and I discovered the game a couple of years ago at a sf/f/g con :). It is too fun!

Fantastic news!!! Congratulations and holding my breath until I hear from you tomorrow:) Wish you'd called me at work to let me know you're a finalist - it would have made my day. So proud of you, happy you're being so successful, and love you!

Hah--I haven't even told Jeff. I know I'm likely not going to win, but it was SO close to the day they tell the winner, I was going to keep quiet :). But I figure, it's something I need to put down as a credential.