Record Your Speech to Erase Your Nerves 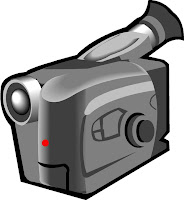 One of the best things I ever did for my writing career happened more than fifteen years before I started writing. While attending community college, I was required to take a public speaking class. At first it was THE most terrifying thing I had ever done. I heard somewhere that more people fear public speaking than fear death, and I was one of them.

And when the teacher pulled out the video camera and set it up....

But wait--THAT is actually the very thing I am referring to here. That video camera. IT was the best thing that ever happened to my writing career. Because these days so much of being a writer is getting up in front of people.

Here's what happened: the teacher taped us during our presentations. But *she* did not ever lay eyes on the videos, nor did the other students. We each had our own tape (yes, VHS tape...) and she sent each tape home with its respective owner. We had to watch ourselves and only turn in our notes about what we saw--the good, the bad, and the ugly--and how we intended to improve.

Let me tell you, the first time I sat down to watch I knew I'd see a stuttering, paaauuuusing, fidgeting fool. But I was wrong. Sure, I about wore out the word "um", but I didn't look nearly as awkward as I'd felt up there.

You don't look as nervous as you feel. That heat you feel in your face and neck? Invisible. The trembling in your hands? Too subtle to see from waaaaay out in the audience, even if they are only ten feet away. If you still worry about it, make your notes on index cards which don't rattle and sway in your hands the way loose-leaf paper does.

The biggest giveaway to nervousness is lack of eye contact. LOOK at people. It will give the illusion that you are confident even when you are not. Don't write your speech out word for word, but use key words and phrases so your eyes are not glued to your notes. And hey--the notes are only for YOU to see, so if you need to, write in reminders like, "look at the audience" and "don't say 'um' too much."

The pause that to you feels like seventeen minutes is probably less than one second. You know the saying "time is relative"? It really is. It will run differently for you than for your audience. If you pause, they experience real-time, while you feel some sort of warped time flow that makes a single, half-second pause stretch into an unnatural length. Remind yourself of that over and over--I promise it helps. And if you don't believe me, record yourself just like I did and see for yourself.

With the exception of the world's most extroverted extroverts, everyone is nervous about public speaking. The fact that you even got up there is going to impress them to a certain degree. And most people will be rooting for you, not hoping for you to blunder. They sympathize, and are merely glad it is you up there and not them, so they want you to succeed.

I never thought that video camera would have such an effect later in my life, but without it I would never have gotten through the speeches I've done already. Knowing what was on that tape completely changed my view on public speaking.

And it's a darn good thing, because I've got some speaking engagements coming up, and boy, am I nervous.
Posted by Kat Heckenbach at 6:18 AM