Two or Three...At Least or Only? 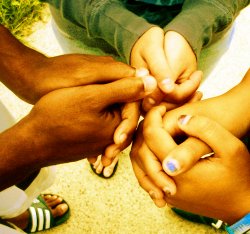 Remember in my last blog post I said I was inspired by something Sunday morning that would likely turn into my next blog post? Well, here it is. This all occurred to me while watching church (the one we've attended the last couple of years) on the internet. We stayed home Sunday morning, having been out very late the night before at a friend's Christmas party. I was very glad we stayed home, because the service we watched, imho, was a circus. Had I been there, I'd have walked out.
For where two or three are gathered together in my name, there I am in the midst of them.
(Matthew 18:20 KJV)
People tend to read that verse as though the words “at least” are in there. “For where at least two or three are gathered…” See? That is the meaning it has always implied to me. Like it’s okay if you don’t have hundreds gathered, because Jesus is present even if you only have a few. But there seems to be an implication that while there’s nothing wrong with two or three, it’s a minimum. More people are still expected. Big groups are the norm, better somehow, but two or three will do if that’s all you have.
But I wonder if maybe it can be looked at the other way. Maybe having “only” two or three gathered is preferential.
Churches these days tend to be all about growing, reaching out, drawing people in. Bigger sanctuaries, multiple services. The church I’ve been attending the last couple of years has started to use what they call “video venues”—where the pastor speaks in person during one service while being recorded. The video is then played at other services that weekend. It’s all because the church is growing by leaps and bounds.
Sure, they push small group meetings—Life Groups—which take place in host houses and involve intimate groups instead of large congregations. But they have felt to me like tentacles still attached to the creature that is the main church.
My family has decided to leave this church. Partly because they have grown so large. We can’t find a way to get connected. We feel the services are turning into performances. Light shows on the wall during the music, dramatic "spontaneous" praying over the congregation...that to me comes across as orchestrated and practiced. Bigger has definitely not equated to better in our minds regarding church in the past, and this has been no exception.
On the other hand, we’ve had some of the most amazing God moments with fellow Christians when there were only a handful of us gathered in situations quite totally non-church related. I personally have felt God’s presence very often while just talking on the phone with a friend, discussing situations in our lives and how we’ve turned to Him. Discussing Bible verses and lessons learned from other Christians. And those moments were generally more powerful than anything I’ve experienced inside a church.
It’s like the distractions disappear. There are no Sunday clothes to put on, no fighting the kids into the car, no tromping across the parking lot. No sit-down-stand-up-sit-down-stand-up.  No finding a seat, no following a program. Instead it’s all spur of the moment, from the heart, in the heat of it, connecting between two or three people and the God they are sharing about.
I’m not saying I think church is a bad thing. My family has every intention of finding a new one, although we’ll be looking for a bit smaller than the old one. What I’m saying is that I’m not sure God intended for Christians to feel they must all cram together in one spot. He can be all places at all times, which means if we all gathered in groups of two or three He’d still be able to hang with all of us at once. And without the distraction of crowded lobbies and strobe lights we’re able to give Him more focus.
So think of that next time you read, “For where two or three are gathered together in my name, there I am in the midst of them.” Don’t let “at least” sneak in there.
Posted by Kat Heckenbach at 8:36 AM

Whoa! I think that's when you know your church has become a Megachurch! We're currently attending a little church of about 200, so it's not too big and not miniscule. I really like it (except for the kids getting sick every week).

As for feeling God's presence, I'm the same way. Very small groups. Heck, I feel closest to Him when having a deep discussion with my hubby.

Try going to Calvary Chapel in Brandon. It was a small church that is Bible based that I attended when I was in Brandon. I believe Joy goes there still. But they go word by word chapter by chapter so you get a good foundation.

Yes, Kessie, the church I've been going to does have that megachurch feel. I'm not real keen on that, although it seems to work for some. And yeah, hubby discussions are the best.