The Map Across Time by C.S. Lakin 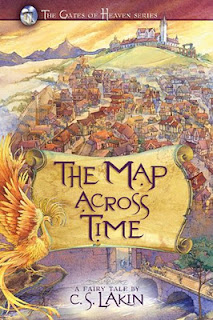 I enjoyed the first book in C.S. Lakin's Gates of Heaven Series, The Wolf of Tebron. I'd read Grace Bridges' review and it sounded like something right up my alley--"a fairy tale for adults." It's a great story.

I liked The Map Across Time even better, though!

The Gates of Heaven series isn't a real series in that the books can be read out of order. They take place in the same world, but aren't necessarily chronological.

The Map Across Time is the story of twins, Adin and Aletha. Their mother the queen is deathly ill. Their father the king is suffering the effects of the curse that has invaded their land. Their future is doomed until Adin stumbles across a talking pig who brings him to a hermit's house. And the hermit leads Adin to a map that will take him back in time, where Adin must find the cause of the curse and its cure.

The concept is simple. The execution is not. The story is complex, and rich, and twisty is such a lovely way! Time travel is one of those concepts that makes my brain feel as if it's being pinched. I just can't wrap my mind around the paradox. Lakin, though, laid out a story that wove the crossed-over timeline perfectly. Brilliant.

The only--and I mean only--thing that bothered me was the use of the "old language." Where words in italics were thrown in here and there, words that all seemed to have randomly placed apostrophes. I doubt this will bother most people, but it is a pet peeve of mine. I will say that their use thinned out as the book went on, and it never once got even close to bugging me enough to make me stop reading. Every ounce of the rest of the book was enjoyable. And the use of the old language was actually integral to the plot!

I highly recommend the book for fantasy and fairy tale fans. And I can't wait to read the third book, which just released, The Land of Darkness.

Oh, and while looking up the links for the above, I noticed that The Map Across Time is on sale at Amazon in print for $6! Go get it NOW!.
Posted by Kat Heckenbach at 8:13 PM

Email ThisBlogThis!Share to TwitterShare to FacebookShare to Pinterest
Labels: c.s. lakin, review, the land of darkness, the map across time, The Wolf of Tebron

Sounds intriguing. Is this one based on a particular fairy tale? I think the first book, which I also enjoyed very much, drew on "The Enchanted Pig."