Interview with Rebecca P. Minor, author of The Windrider I: Divine Summons 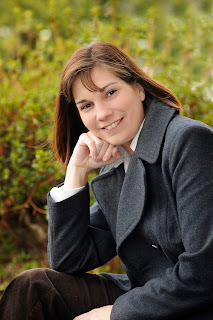 Today I'm interviewing Rebecca P. Minor, or Becky as I've known her now for a couple of years. Yes, we're fellow authors, and now fellow Alumni on New Authors' Fellowship. We've "met" a few times in other online circles as well. I think it was only natural that Becky and I would become friends as we have a lot in common (as you will likely see in the following interview):

K: Becky, you write primarily fantasy (yay!). What was the first fantasy book you remember reading? And what was it about that book that made you want to keep reading fantasy?
B: The first fantasy book I read was Madeleine L’Engle’s A Swiftly Tilting Planet, and the funny thing about that (besides the fact that it’s the third book in the series and I didn’t bother to read the first two before I dove in) was that the reason I bought it at the school book fair was because it had a unicorn on the cover. (Talk about profound reasoning!) I read and re-read that book too many times to count, but from there branched into the Chronicles of Narnia. I was officially a fantasy addict from that point. The things that drew me into fantasy were the wonder of journeying to another world and the opportunity to experience a place where the rules that govern my real-world life didn’t apply. I admit to shameless escapism.
K: Fantasy writers have the unique situation of really being able to create a world from scratch, with any sort of beings, plants, animals, physical laws, etc., that we can think up. But we also find ourselves needing to follow some “rules” in order to please readers with expectations about what fantasy is.  Do you find that an easy balance to maintain? And how do you go about it?
B: I think the place I struggle is pushing the boundaries. I am a fan of resonance as a reader—what I mean by that is steeping in concepts, characters, and situations that have meaning to me because of their internal notes of familiarity. The balance I am trying for in my own work is the lightly-tethered relationship between resonance and the wonder of experiencing something new. It’s never easy, and at least with my novel, I’ve found it got better when I went through the manuscript and made a point of increasing the “wonder beats.” The elves , monsters, and medieval chivalry that resonate with many fantasy readers remain, but my own twists on how magic works and the quirky nuances of the world help keep it fresh. (I hope!) 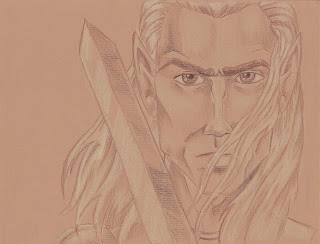 K: You are also an artist. I will shamelessly say that I am a huge fan. I particularly love the animation style of your drawing that still has that “sketch” quality. What drew you to animation art? Are you professionally trained in that area? What is your favorite subject matter?
B: I got into animation because I’ve never been able to keep myself from drawing, and my main interest is character design. I am huge fan of the work that was being done in hand-drawn animation in the Disney Renaissance of the late 1980’s and early 90’s, so when it came time for me to go to college, I was thrilled to discover a person could major in animation. I got my Bachelor of Fine Arts in animation from The University of the Arts in 1997, and although I only worked formally in the industry for a few years before I began raising my family full-time, I still find a lot of use for the skills I learned there. (And thanks for the kudos on my drawing style. I can’t paint, but I know my way around a pencil!)
K: If you *had* to pick between writing and drawing, which would you choose? (I know, not fair!)
B: That’s not a very nice question. ;) To be truthful, though, I think I’d pick writing, simply because it inflames a more intense passion for me. Hopefully that would be the right choice and people wouldn’t say “You doofus! You’re a way better artist than writer!”
K: Are there other genres besides fantasy that you enjoy writing now? If fantasy (for whatever reason—no, I can’t think of one) were ever to become “not an option” which genre would you shift your focus to, and why?
B: I’m focused on fantasy pretty exclusively right now, but I think I would also be interested in dabbling in historical fiction, especially the period surrounding the American Revolution. Believe it or not, I may at some point try my hand at writing a Christmas or Easter musical (yes, a stage play for church) because I think the marketplace is tragically limited in product choices. And I want to write a screenplay some day. Alas, those projects will have to wait. 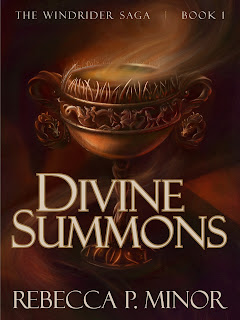 K: You are in a unique situation of landing two publishing deals at once. One with Diminished Media Group for your Windrider series that appeared as a serial in DMG’s online magazine, Digital Dragon.  The other is Sword of Patron, a full-length fantasy novel that will be published by Other Sheep (the speculative fiction imprint of Written World Communications). Tell me for each:
What drew you to those particular publishers?
B: The relationship with Diminished Media was just a natural outgrowth of the serial and its run over at Digital Dragon. I got tied into Digital Dragon when the powers that be over there approached me and asked if I wrote short stories, and would I consider submitting one to their newly established (at the time) magazine. I discovered I don’t write short stories that well, but I can write serial fiction, it seems, and hence, The Windrider.
As I looked at publishers for Sword of the Patron, Other Sheep was on my short list to query. One of their representatives was attending the Greater Philadelphia Christian Writers Conference this past summer, and when I had a chance to sit down and hear more about what Other Sheep was up to and might be delving into in the future, they seemed like a good fit. (For example, they have a real eye on the convergence of media in the coming days of entertainment, and I would love for my work to be presented in the multi-media ways they are considering for their titles.)
And just let me say, because I feel like I can’t say it enough—if you are a writer, go to conferences! There’s no place to learn more in a weekend or to make better connections.
K: What drew them to you? In other words, what was it about your manuscripts that they seemed to  particularly enjoy?
B: I’ll have to speculate a little about this, but I think the full package of my book, plus a flashy one-sheet, plus the work I had put into Sword of the Patron (which involved some in-depth critique from some respected mentors) made the book “the real deal” for folks who read it. Not to toot my own horn, but I met with three editors and an agent in Philadelphia, and all of them requested the full manuscript. I guess it was simply time for that book.
As for The Windrider, I think an overlap in tastes in fantasy literature is what really gave me an edge with Tim Ambrose over at Diminished Media. The brisk pace and the resonance back to the sword and sorcery novels being written twenty years ago seemed to draw Tim into the narrative and make him a fan as well as an editor.
K: Awesome, Becky! I for one am really happy about both of your books, and wish you the best of success. Thanks for letting me get inside your head a little.
Ya'll can find Becky--er, Rebecca--haunting around online at her blog: The Call of the Creator,  and at Facebook.
And of course The Windrider I: Divine Summons is available at Amazon for Kindle and Barnes & Noble for Nook. 99 cent for a limited time--so hurry!
Posted by Kat Heckenbach at 7:04 AM

Lovely interview (always fun to learn new things about people you know... namely the desire to write cantatas) and congrats on all mentioned publications you have coming out. I for one am a huge Wrindrider fan and can't wait for Windrider Saga Book II to release :)
Best of luck to both of you ladies!

I enjoyed the interview, ordered the book and have read the first three chapters. I want to see what happens next.

Thanks for stopping by! Becky was so easy to interview :).

Thanks for stopping in and "signing the guestbook" so to speak, friends. I'm glad you enjoyed the interview, and I hope my Windrider tale is proving engaging for all of you who are reading it.

I appreciate all of your support.