The Resurrection by Mike Duran 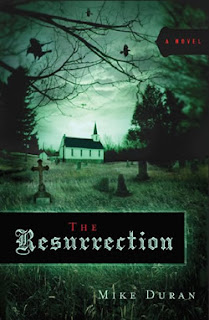 Mike Duran is known for hitting on the controversial topics related to Christian writing. His blog posts consistently make his readers think about their definition of Christian fiction. He also doesn't believe in playing softball when it comes to reviews. The standard among Christian fiction reviewers tends to be a sappy-happy pat on the back, a "great job, my fellow believer!" and shining five stars.

All authors want their readers to love their books. But Mike strikes me as the type who'd rather have a critical breakdown of his than a standard glowing review. So, I decided to do this review a little differently....

The Resurrection is a Peretti-style spiritual warfare novel. It takes place in a small town, with a preacher and certain members of his congregation smack in the center of the battleground.

First up--Ruby Case, church member. She's got rock-solid faith. Is she flawed? Well, she has a limp...but she's the kind of woman you would want babysitting your kids because she's loyal, trustworthy, and has a heart of gold. She really made me think about the whole "perfect Christian character" thing that is so prevalent in Christian fiction. It's actually not the "goodness" that makes those characters annoying. Ruby is "good." She doesn't have a seedy past or fatal flaw (unless you count a stubborn independent streak). Those are techniques used by some Christian authors to show that they have "flawed" Christian characters. But here's the truth--some Christians are just genuinely good people. The thing is, though, they are not pious. And the characters in Christian fiction who come across as annoyingly good are actually pious and self-righteous scripture-quoting cardboard cut-outs. Ruby is not. She 's got serious depth. So while I couldn't point my finger and say, "Look, see, he made her 'flawed' so this book is really edgy," I can say she was real.


Reverend Ian Clark...no rock solid faith here. More like rock slide. This guy is totally on the fence, full of doubts, feeling like a faker in front of his congregation. Talk about a flawed character. But it does come from somewhere. He's suffered some real loss that made him feel the way he does. My gripe? I would have liked to see more of that past. Some really emotional flashbacks that give me a clear picture of his love for and closeness to his sister whose death set him on the edge. It would have endeared him to me, and I would have connected to his pain. However, I couldn't help but wonder if Mike didn't include that stuff on purpose. Maybe he wanted us to see Clark as a big slug, so we spend the first half of the book thinking, "Man up, you big wuss."

Side characters: Jack is Ruby's loving and devoted husband, who has left the church because of its hypocrisy. Vin is Ruby's best friend. The tattooed ex-druggie has a strength Ruby wishes she could muster, and a faith that comes from true thankfulness for the grace God has shown her. Both characters added richness to the story. There are others, of course, but telling you much about them will just be giving spoilers....

The Conflict. Ruby's touch seemingly brings a dead boy back to life. The town is in an uproar. Half of them think she's a saint and people come to her with gifts and requests for miracles. The other half think she's a witch or worse. All she wants is to be left alone, and come to terms with the reason God used her. She ends up drawn into a search of the town's history, though, when echoes of her experience bring forth information about past events that are eerily familiar. Clark, of course, is turned to as the spiritual leader--but how can he fulfill this role when he holds so many doubts? Work in a section of town that seems steeped in new age religion and pagan idol worship, and a friend of Clark's who is tugging hard on his strings of doubt.

The Plot. Hm. In the end, I could say, "Well done." In the middle, I felt it was disjointed at times. Not that it was hard to follow. But there were times when I felt something was introduced, to then be dropped, and the focus shift was slightly jarring to me. But the ending brought all the threads together smoothly. Any bumps in the road were very much worth it because of the destination.

Lastly, the thing that warranted an author's "afterward" in the book. Mr. Cellophane. The spirit who haunts Rev. Clark. I will leave you with this statement, and I want you to think about the difference in its meaning depending on whether I stuck five stars or one star next to my review: "Thanks for the nightmares, Mike." ;)