Top it with Cheese 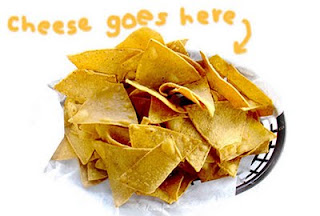 So, I let a fellow writer read Finding Angel recently. It was only fair, as I had read her entire manuscript and critiqued it from beginning to end. She had some awesome things to say about Finding Angel...except for a few specific scenes.
She said they were missing cheese.
My response: "Huh?"
She explained that she meant the melodrama. The somewhat overly intense use of emotion at times of serious conflict. I thought I got what she was saying, kinda.
Had I been to stingy with emotion?
I opened my document to the first scene she mentioned. Lo and behold, she was right. The chapter before the scene read pretty intensely, with lots of emotion from Angel until...well, until the scene where she should have been completely overwhelmed, but totally wasn't.
I gave it a tremendous amount of thought. I realized a few things:
1) I was relying too much on the events that these scenes highlighted to grab the reader. But no matter what is happening, the reader isn't going to feel it unless the protag feels it.
2) I'd been holding back because I didn't want Angel to be a crybaby. Maybe because I'd read (part of) Twilight and told myself, "Oh, no, I will NOT let my character be such a whiny wuss." But I pulled back too far and went the other way. Not everywhere, just the scenes where the emotion should be running really high. Can you say "backward"?
3) I didn't include enough descriptive physical detail. The scenes are fast-paced, and I must have thought that adding that detail would slow it down for the reader. Hah! You can, apparently, go overboard with killing your darlings.
So....I added back in some detail and ramped up the emotional element. Really got inside Angel's head at those moments even though some of it centered more around other characters. I made sure to read other parts, like those leading up. And it seems I did have all the necessary elements elsewhere--I've got the meat and other ingredients in good amount. The only thing missing was the cheese.
Posted by Kat Heckenbach at 8:27 AM

Food for thought -- nacho-livres, don't hold the cheese.
I'm really enjoying your blog, but trying to resist a craving for tortilla chips.

Everything is better with cheese!

I've never heard of intense emotions referred to as "cheese." I love it!! So, is "Finding Angel" now a cheeseburger? It's definitely got the beef! :^)