This week has been kinda weird. The days have both drifted and zipped by at the same time. I got *some* writing done, but have focused more of my writerly energy on copy-editing a manuscript for someone else. 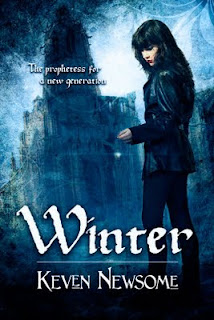 Oh, no. Hand-slap, Kat. This is not a "manuscript." It has earned the status of full-fledged BOOK, and will be released on June 1st through Splashdown Books' new imprint Darkwater.
"What book is it?" you ask. It's called Winter, and the author is Keven Newsome, founder of New Authors' Fellowship (you know, that group blog of which I'm a member--and if you are not, you *should* be following!).
I read the manuscript--back when that's what it was, before Grace Bridges from Splashdown got her hands on it. I knew--let me repeat--I knew--she'd fall in love with it. It took all my restraint to not rave and insist she publish it--she needed to make her own decision, of course, and I wanted no accusations of trying to influence. Instead, I kept my mouth shut and simply told her I had a feeling I knew what she'd think.
I was right, of course!
I've had to keep my mouth shut about the contract, the book cover design (amazing work by Holly Heisey!)...all of it, because Keven wanted a big reveal. He had plans...including an awesome trailer. Which you can view at the end of this post.
What I want to say really quickly before that, though, is how excited I am about this. The book rocks. It is close to home for me because the main character is Goth. I was never full-fledged Goth, but I teetered on the edge for some time. I can really relate to her. And the story itself is good. Dark, suspenseful. Perfect for a premier release at Darkwater.
Also, props to the editor who is combing through Winter before me--Kristen Stieffel, who is not leaving much for me to actually edit :P. She's doing an amazing job! I'm just more brutal when it comes to "chop, chop, kill your darlings." I've had another crit partner dub me "The Hacker." What I say to that--MY writing wouldn't be what it is if I hadn't had a "hacker" of my own go after it. I chop-chop out of love, because I have full faith in Winter.
OK, the time has come. We are at the end of my post, and I leave you with the trailer for Winter, by Keven Newsome:
Posted by Kat Heckenbach at 6:39 AM

Why, you sneaky female felines. I had no idea you were working on that together!
Bad kitties!

Sounds like a way cool book. Love the cover.

Sorry, Robynn, we weren't trying to be sneaky about it! :D

And yeah, Jeff, the cover is awesome. Made me very, very jealous ;). hehe.

What an intriguing story! LOVE the cover, too.

Tina, you would love this book!

It is close to home for me because the main character is Goth. I was never full-fledged Goth, but I teetered on the edge for some time.

I was a very morbid kid in high school. I probably would have been on the Goth fringe if Goth had existed back then. Instead, it came out as stories of Cute Woodland Critters on Death Row. Beatrix Potter writes The Green Mile. I was strange.

Goth was pretty much in its infancy when I was a teen, and it held real appeal for me--all that dark and sort of sticking to the shadows. And it was more acceptable for artistic types, which I was, even though it was still considered completely freaky by most.

You have your style nailed with "Beatrix Potter meets The Green Mile"--and you make it work, btw.