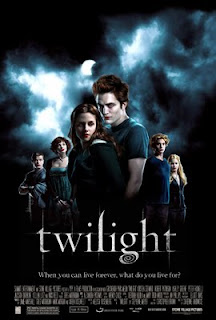 What have I done? My kids now like the Twilight movie.
I checked out the DVD from the library. Why? Well, because I never could finish the book (but you know that), and I wanted to be fair, to see the story to the end, and see the other aspect of this (ridiculous) phenomenon. I read nonfiction books by people with opposing viewpoints so I can be educated on both sides of a debate, and I consider this something along those lines. In other words, I can't justifiably say the movie is stupid if I've never seen it. (And, I thought it'd be fun to heckle.)
Now I've seen it. Now I'm justified. I am also horrified because my kids do not share my disdain.
I will admit, the movie wasn't *quite* as awful as I expected. There were even a few scenes I enjoyed. The one in the ballet studio was pretty cool, and the very end in the gazebo at the prom. Those were the only places in the whole movie, though, where I bought the characters. The rest of the time I kept thinking that the vamps looked like pretty mimes, and Edward in particular looked like a tortured James Dean wanna be. And the expressions Bella kept making--what is with all the erratic blinking and facial twitches? Yes, I found her just as annoying in the movie as I did in the book.
Also, the whole scene where Bella wakes up with Edward in her bedroom--can you say stalker? That scene made me want to scream out to every girl on the planet. You see, it looks all romantic I guess on screen like that--I personally found it creepy--but in real life if a guy were to do that he's probably a psycho.
The only thing that truly surprised me was the Cullen family. I didn't get far enough into the book to realize the "parents" and "siblings" were actually nice. (Well, except for the one blond, who seemed to have a serious attitude problem.) I knew from the book that they only ate animal blood, but I had no idea that the father was such a genuine guy, and that the whole family accepted Bella and even risked their "lives" to save her. (Well, blondie was a little resistant :P.) That bit did soften my heart just a tad.
It did not, however, make me want to run out and get the other movies. My kids, on the other hand...I guess I'll just have to hope they forget. At least they only asked to "rent" the next movie--they know better than to think I'd consider buying it!
Posted by Kat Heckenbach at 6:09 AM

Heehee. You should really watch the sequels. I can't remember the last time I laughed so hard over a movie. Or groaned...

Well, my kids want to get the other ones. I told them that we will as long as we can get them from the library :P. And yeah, groaning is right. I just don't see the big appeal as anything other than a spoof!

I've not read the books (shocking, I know) but the nieces made me watch the movie.

Aside from "yummy" whenever the dad vamp walked across screen (couldn't help myself), my only comment was "They couldn't afford better special effects?"

Oh, wait. There was that rant when the SHERIFF couldn't stop his underage daughter from driving away in the middle of the night. That rant may have lasted to the end of the movie, as I think about it.

I have not been invited to watch the sequels.

This does not bother me.

Oh,yeah, the special effects were pretty bad. And there were just way too many inconsistencies for me--including the dad being even more of a wimp than his daughter.

Glad to see your handling the lack of invite well :P.