Return to the Dim Knight

I keep my promises. We ARE back to our regularly scheduled art series today.
Since we took a little break, let me list the recap here of my previous posts:
Post #1: The Other Side of Me
Post #2: The Beginnings of Kat the Artist
Post #3: The In-Between
Post #4: Back to the Drawing Board
Post #5: An Inordinate Fondness for Beetles
Post #6: From Cover to Cover
And, that brings us back here. The second cover drawing for Tales of the Dim Knight by Adam and Andrea Graham.
Remember, we put together the drawing of Dave the mild-mannered janitor as he fought a battalion of mops, but it wasn't quite right for the cover. The authors, Adam and Andrea, really wanted to see Dave on the cover in full superhero garb--his "Powerhouse" costume, which they described in the book as a cross between Buzz Lightyear... 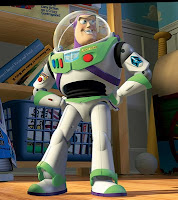 Which meant me putting on my designer hat. I have never really designed a superhero suit! Maybe as a kid, but it was probably something Wonder Woman would have worn, and, um, I doubt Dave would have been too keen on that ;).
So, I began sketching: 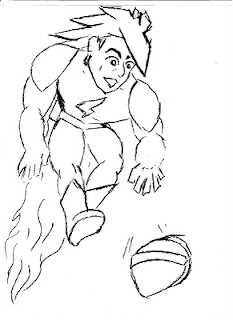 Really rough. Body's out of proportion. Hair is bi-ig. No one is too happy with the fact that his helmet is off. I explain, however, that I can't figure out another way to make him comical. I tried. None of THOSE sketches went anywhere but the trashcan, though. The issue was that with his helmet on, I felt focused on the costume, which meant trying to make it look "cool." His suit isn't supposed to be stupid looking, but this IS a SPOOF. Everyone sees my line of reasoning, so they let me continue in this direction.
*NOTE*
Here's an important point. Publishers don't slap cover images on at the last minute. It takes TIME. If you are a first-time writer, you have probably looked at the Writer's Market (that ginormous book that lists publishers and agents and all the known information about them) and seen that the publishers section lists the time it takes from acceptance to publication for many of them. You may have thought, "It takes THAT long???" Well, yeah. Editing, cover design, layout, tweaking. Publishing a book takes a lot of work.
It is VASTLY important to lay out enough time for these things. Grace came to me for this artwork while there was TIME to get it done, so we had wiggle room. I got to play with my ideas, while Grace, Adam and Andrea thought about what I was doing, came up with suggestions, and we worked together. Remember, though, this is SMALL PRESS. Big presses work very differently--in a big press the author may never even see the cover until it's on the final product. Or they might--but no guarantees.
*END NOTE*
So, I tweak the design--stretching the legs to the right length, taming the hair, designing a cool helmet (Andrea did call my helmet "awesome!"). 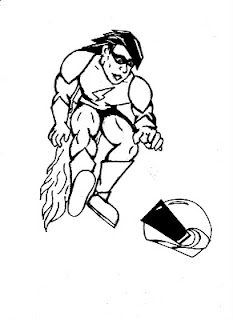 Much cleaner, eh? This seems to be going the right direction for everyone now, and Grace does a mock-up cover that ends up being used the the sample chapters (which were available before the official book release). But we were in for a surprise. Remember, there was still time before the release, and while this was fine for the sample book, and everyone was happy with my drawings, we ended up with the opportunity to utilize the artistic talents of someone else....someone with painting skills that added a new dimension to this cover. 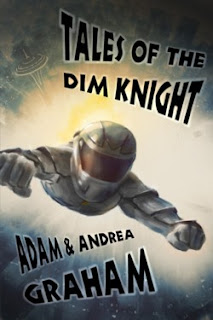 Way different! But really, what this book needed. Rest assured, my drawings were used. As interior art--black and white, line drawings. And, of course, as a guide for the new cover artist in designing her version of Powerhouse's costume.
I'll give the full skinny on where the new cover image came from next time. It was a wonderful surprise--and in case you're worrying, no, I was not upset at being bumped from the cover. Teamwork is important, and I truly love the new cover art. My drawings work better, IMHO, as interior illustration anyway.
So, be prepared next time to meet the lovely and talented Holly Heisey....
Posted by Kat Heckenbach at 6:33 AM