From Cover to Cover

This is going to be a nuts and bolts post for those of you interested in the process of getting a book cover together. Actually, it's going to span several posts. Hopefully, I can keep your interest through all of them.
Here goes.
A few weeks after doing the key drawing for the cover of The Duke's Handmaid, I received an email from Grace at Splashdown Books asking if I would be interested in another illustration project.
I said: "What ya need?"
The answer: "A superhero."
Not just any superhero, though. Powerhouse is the character in a superhero spoof, Tales of the Dim Knight by Adam and Andrea Graham. Grace sent me some excerpts from their book so I could get an idea of the description of the character, both in and out of costume.
I've never done animation work. I said I'd give it a shot, though, and started researching. I looked up images online, and checked out books from the library--Marvel Comics books and Manga drawing books.
At first I asked only a few questions and began sketching. I chose to start with a scene that occurs before the main character becomes Powerhouse. He's got powers at this point, but doesn't know anything about them. He's forced to find out quick, though, when he's attacked by a battalion of mops.
Oh, yeah, the main character, Dave, is a mild mannered janitor, of course. Superhero fan-boy, too. Who else would be chosen to save the world? ;)
My first sketches were rough, just to get the ideas flowing: 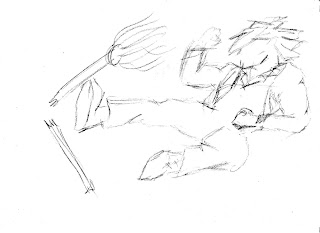 OK, he's facing the wrong way for being placed on the front cover, but Grace likes the overall layout. So I flip it, and add some detail. 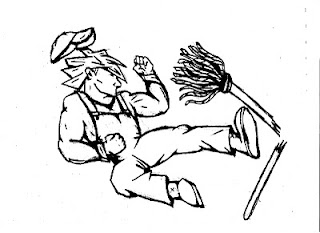 That one is actually my favorite. I like that it's cleaned up, but the face is unfinished. We can't use it that way, though. He needs eyes and a mouth ;). The thing with doing this kind of artwork is that it's NOT for the artist, it's for the publisher and the authors. So I add features, which makes it more cartoonish and adds the right comical element. 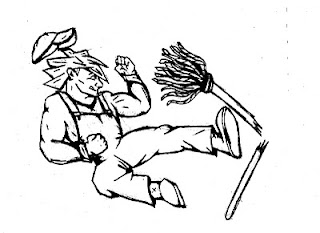 We do a test version with color. Or rather, GRACE does the color. I don't have the software for that at the moment. I need to get it. Can't call myself a self-respecting artist without it. But good software is expensive, folks, and to be honest, Grace is the one who wants to set the colors anyway :). She rocks. 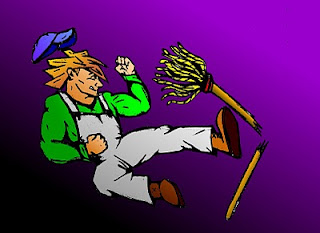 We all love the end result, but decide it's not quite right for the cover. Maybe the back, but not the main art on the front. And his hair's the wrong color. Oops ;). Easily fixed, but instead of moving forward with this one much more, we shift our focus to the idea of having Powerhouse on the front in full superhero garb.
And that, folks, will be the next post....
Posted by Kat Heckenbach at 7:24 AM

How fun is this!? Great job. . .nice to see it from sketches to finished. . .can't wait to see more!

It's attracted my interest. Keep going!