The Art of Alpha Redemption

P. A. Baines's sci-fi novel Alpha Redemption released from Splashdown Books a few months ago. It's a unique approach to story-telling, written in a style that reminds me of what Douglas Adams' serious side must be like.
So this book, completely unlike Tales of the Dim Knight, needed a very serious cover. Today, I'm going to let the book's cover artist, Zoë Demaré, tell you how she developed the cover image: 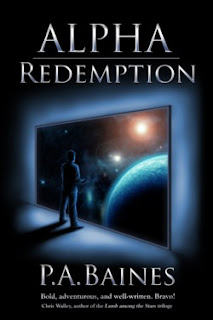 "My initial inspiration for the cover of Alpha Redemption presented itself before the book was even published. I was lucky enough to read the first draft, and in the scene where Brett gazes down on a planet they discover (that’s not giving too much away, is it?), I happened to be listened to the soundtrack from Defiance. I came to a section in the music that just fit the scene so perfectly. Suddenly the words on the page sprang to life in my head and I saw something so beautiful - the melancholy interior of a ship bathed in blue as Brett’s darkened form gazes out into space.

It was so picturesque in my head, I knew immediately I wanted to draw it. Except I didn’t have much experience with digital painting and I knew that in order to do the image any justice, I would need to wait. At any rate, it continued to lurk in my brain.

Not long after that, Alpha was published and I agreed to do the cover. Once we agreed on all the little details about style and composition, I started getting to work. However, I soon found that since many of the techniques I would have to employ were new to me, I was sitting at the bottom of a very steep learning curve.

The first thing I ever did for the picture was the planet. In hindsight I realize it would have been better perhaps to work on the interior of the ship first, since this was the least enjoyable to me. Nonetheless, I went hunting online for a variety of tutorials on creating space art and ended up with a whole bundle of wonderful resources.

In order to create the planet, I learned that a texture would be needed; especially since I wasn’t confident enough to paint everything from scratch. In order to get a good look for the land and clouds, I‘ve read people recommending the textures found on a large stone, or even rust. However, as I had nothing like that available to me at the time, I opted for mold.

In order to turn that photo into a planet, I simply edit the texture so that it suited my needs, then layered that same texture twice, one on top of the other, and played around with the colours.

Next came the space scene. With all the amazing effects that can be produced to cobble together a star scene, my initial reaction was to make it super busy and bright. However, as the image went through revisions with my Dad, the author of Alpha Redemption, I toned it down to create something fairly minimal.

After that came Brett. For this I took photos of my brother and painted over him to create a plain black silhouette. To create depth, I painted a strong blue fringe-lighting. Then came the ship itself. Here I feel that my lack of skill in painting shows. Since the interior of The Comet is described as being quite clean and lacking in too many details, I really struggled to understand how would be the best way to approach this part of the illustration.

In the end I simply settled for creating a strong blue glow and strong shadows. This too, like the fringe-lighting on ‘Brett‘, was painted in. As for the monitor, I wanted to emphasise that it was still a part of the ship while giving it some unique form of its own. The one way I tried to do this was by giving it scan-lines, which you can see on the back of the book in the close-up.

Overall it was a thoroughly enjoyable experience and I feel honoured that I was given the opportunity to be a part of this project."

Thanks, Zoe!
I personally find the simplicity of the cover to be one of its strengths. The image of Brett and the isolated window perfectly reflects the story inside.
Once the artwork was done, the next step was choosing a font and tweaking it to the right proportion. Grace Bridges (owner of Splashdown Books) wanted nothing competing with that image, and I think she chose the perfect font.
Then she moved on to the back cover. This is where I finally come in :). Grace was originally going to put a close-up of the planet you see through the window on the back. But I suggested she shift that over to Brett. She took my advice, and this is the result: 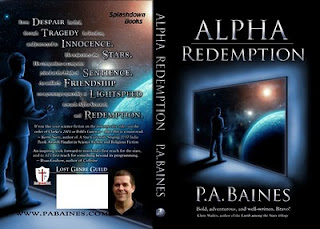 Notice the cool back cover copy. I love the unconventional "blurb" on the back of this book, too.
Hah! There's just about nothing I don't love about this book :).

Posted by Kat Heckenbach at 7:14 AM

Urgh--I could NOT get the fonts and text colors to work right today, so I apologize. I tried, really, really tried.

My biggest thanks to Zoe for writing about her process here!

Actually it was Zoe who picked the font for the cover this time. And she got it just right with the 3D metal effect. I used a similar effect on the back but if you look closely you'll see it's not exactly the same - a little bulkier to make the smaller text more readable.

Thanks, Grace. I guess my memory didn't serve on this one ;). Yes, I love the 3D metal effect, too.

I think it's really lovely. :)