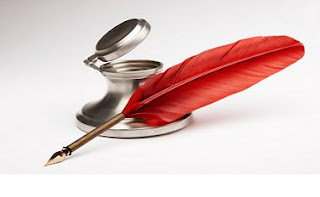 And...another week has gone by without me posting. Go ahead, say it.

I've been editing, though. Scraping away ever word I can from my manuscript of Finding Angel. I am ASTOUNDED by how much I've cut. I'm three-quarters of the way through and I've shaved off 7,000 words. My guess is that I will hit about 8,000 words at the end, bringing my final word count down to just over 99,000.

NOTHING about the story itself has changed. When I went on my little tirade before, saying I'd never be able to get my story down to the recommended 80k words, that's the kind of thing I was referring to. I knew the story itself could not be cut or altered.

Lots of places where I combined dialog tags with action thus:

"Blah, blah, blah," she said, tugging her arm away.

That can be changed to:

"Blah, blah, blah." She tugged her arm away.

Shorter. Gets rid of "said" which, let's face it, has to be used a lot in novels. Take out all the ones you can without making it hard for the reader to follow who is speaking.

Another thing I discovered: I overused the words finally, immediately, and suddenly. How wickedly embarrassing....

I'm not an "-ly adverb"-hater. I do think they work sometimes. Don't use 'em as a crutch, of course. But they're not the devil.

Lastly, I cut a few sentences and paragraphs here and there. Places where I had shoved in a blurb of back story that wasn't really needed. Or where I let the internal dialog go on a smidge too long. Minor changes, though, really.

What it boils down to is this: I can still stand on what I said before. The story is ready. This final bit of polishing seems to me to NOT be enough to hold a publisher back from taking my book. The plot and characterization are strong. I found only a few, tiny places I felt the need to actually rework a paragraph or bits of a scene because I didn't like the wording. Can count them on one hand, though.

Granted, that included the opening. BUT, and I've said this before, I've had some professionals look at that chapter and say it was fine as-is. Still, can't hurt to ramp it up a notch.

So there ya have it. I have been working. Feeling pretty bad about calling me a slacker now, aren't ya?
Posted by Kat Heckenbach at 8:43 AM

I'll call you a working-slacker. I'm always surprised at how much I can cut from a story doing what you're doing. I can usually trim a couple hundred words from a 3rd draft without breaking much of a sweat. Fortunately we work in words and not wood or stone. If we delete something we need to keep, we can put it back and no one will ever know.

When I first saw your count of deleted material (7K), I thought, wow, there's a story or two in that many words. Imagine a story composed solely of the words you cut. : ) Good luck.

Wow--good on you for editing so much!! :) Best of luck with your book!!

Write on, my friend. Sure, I miss your blog posts, but hey, you gotta edit/write, right? LOL.