Catching Up and Other Suchness

(Yes, I'm making up words for my post title.)

Another "lots of little stuff" post today. Looks like July is going to be slammin' for me. Coming next month:

Caprice Hokstad's book, The Duke's Handmaid, will officially release. A couple of final tweaks have been made on the cover, including changing the tilt on the key I drew to make it more easy to see. Here's the final cover: 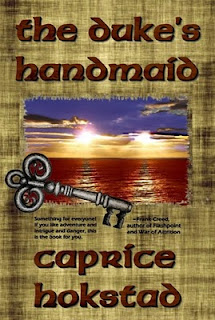 The publisher has also decided to use the key as part of the chapter headings, and a tiny version for scene breaks. How cool is that?

Speaking of book covers, I've come up with another design for Finding Angel. I'm not posting it quite yet, though. I appreciate all the comments on the other one, both positive and negative, and am taking all of it in while I do more designs. I have to say that the comment Jeff Chapman added today is the one that has hit the mark for me. He said a book cover can't possible convey an entire story, or the cover easily becomes cluttered. It must be eye-catching, though, and intrigue the potential reader. I agree with that 100%. Of course, it should be significant to the story--a space ship, no matter how cool, does not belong on the cover of a fantasy that has not one space ship in it. But since the elements I included on my original cover design are in fact quite significant to the story, I've kept them, but I'm working on making the overall image more cohesive and eye-catching.

And last, but not least, another NOTEBOOK NUGGET. Well, actually, two.

The first is a Bible verse that I really, really need to keep in mind these days:

"You will seek me and find me when you seek me with all your heart." Jeremiah 29:13

The other, a fortune:

"A truly creative person rids him or herself of all self-imposed limitations." The key word there, of course, is self-imposed.

Seek Him with all your heart, and stop holding yourself back from your full potential. It may not seem that way at first, but if you think about it you'll see that these two ideas are inextricably tied together.
Posted by Kat Heckenbach at 11:03 AM

oh, I am so happy for your publications! And inspired by the others.
Love, love, love that verse :)
Great post.

Congrats on the upcoming publications. That key is going to be the most copied key in history. : )

How fantastic that one of your short stories (Frog Face) is being published on your birthday - 2 things to celebrate on the same day! I can't wait to read it and the others that are coming out and to see the magazine cover. July is your month:)

I like the change in the position of the key...really shows it off.

Keep seeking - He's opening many doors through which you'll reach your potential.

Oh, how fun! That is so neat that you are designing book covers and having stories and pictures published, especially on the front page of a magazine. :)