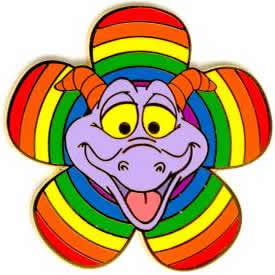 I wasn't sure if I wanted to just throw out a nugget from my encouragement notebook every now and then, tacked on at the bottom of a post...or if I should make them separate posts, highlighting where each came from and its application to writing. Maybe group them together according to theme, like perseverance, fighting discouragement, or humorous quotes? So many ways.

In the end, I decided it doesn't really matter. I'll just post them as the mood strikes me :).

So, today's is in honor of the vacation I just came home from--camping at Disney's Ft. Wilderness. We spent a day at EPCOT, where there is this ride called "Journey Into Imagination." It starts as a tour of a laboratory in which a scientist does experiments on senses. But his "assistant"--a little purple dragon named Figment--hijacks the ride and redirects the tour into "imagination." He encourages you to go beyond what you see, hear, smell, touch, and taste, and create your own experience of the world, using your (say it with me) imagination.

Here's the notebook nugget, which came in the form of a fortune cookie:

"It is up to you to create your own adventures today!"

As a writer, I have to be reminded of that sometimes.

This particular nugget came on a day when I was feeling rather uninspired...disappointed no stories ideas had dropped from the sky into my head for a while. Sometimes that does happen to me--a story idea strikes out of nowhere, or as was the case for one story I wrote, two old guys started arguing in my head. But, other times the story has to be dredged up from the depths, or I have to take hold and really work at its creation.

This doesn't mean I think you have to force yourself to write when it just ain't happenin'. Prompts, journaling, and daily word count goals work for some writers, but not for others. But there are days when you have to get the adventure going in your mind. You might not get a single word on the page, but put your focus on your story and see where your imagination takes you.

Quick writer tip: Make sure you don't neglect those aforementioned senses in your writing. When you're imagining your story world, think about the noises things make, and the smells, both pleasant and unpleasant, that may waft toward the character. Let your characters touch their surroundings--are things hot or cold? Wet? Sticky? Smooth? Itchy? And, um, feed them now and then :).
Posted by Kat Heckenbach at 4:08 PM

Great stuff. . .Loved the nugget and the "don't forget"
Love the post, Kat!

:) sometimes we got to make the adventure happen!
I also feed my character now and again...in fact, my new novel American Midnight has several scenes that involve food ;P